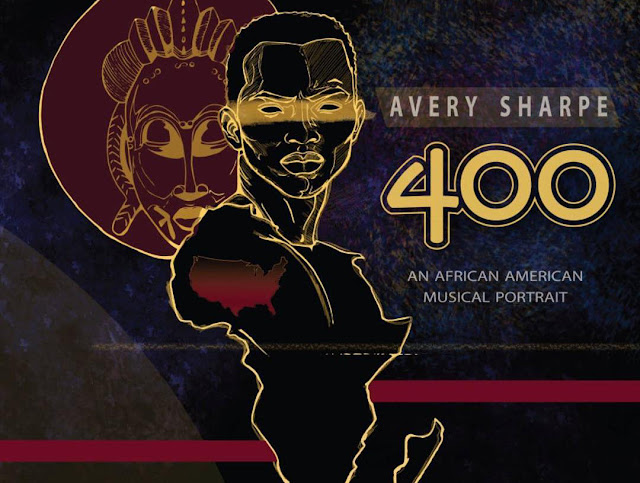 Avery Sharpe's 400: An African-American Musical Project is one of those sprawling and ambitious projects that fixes upon several points in history and brings them together, presenting a new perspective from a thoroughly artistic standpoint. Sharpe is a supremely talented bassist from Georgia, and he was inspired by Duke Ellington's premiere of Black, Brown and Beige: A Tone Parallel to the History of the American Negro, which occurred at Carnegie Hall back in 1943. The 400, of course, refers to the number of years that have passed since the forced arrival of the first African slaves to Virginia. Sharpe uses a large and constantly evolving ensemble, complete with choir, to follow the history of slaves in America, century by century.

Avery Sharpe is perhaps best known as the long-time bass player for McCoy Tyner; his sound is the driving force behind this project. He surrounded himself with some truly remarkable talent for 400, most notably Kevin Eubanks on guitar and his brother Duane on trumpet. There's a family structure throughout--the Rivera family, including Sofia, makes up half of the Extended Family Choir, which is led by Kevin Sharpe. That's the important element in 400--this could be an album of anger and resentment and hopelessness, but instead it's about love. Love of family, love of each other, love of ourselves.

This is not a hard pill to swallow. Much of 400 is supremely musical, with beautiful melodies, haunting themes and fascinating ideas. It moves chronologically and always reflects the times--"Colonial Life," "Antebellum," and "Harlem and the War to End All Wars." The final song is titled "500," which is an obvious reference to the future and where we'll be 100 years from now. There are constant cues from history to guide us along, gospel and spirituals of course, the waltzes of the slave owners, American folk music and ultimately jazz.

It's an understatement to say that anything in 400 is half-hearted. There is a purity in the message, a reinforcement of hope, that makes this project seem far more optimistic than it should be. The idea behind gospel music and spirituals was always the need to be uplifted, just as the message of jazz is to think and to put one and one together to make two. 400 reveals a thrilling level of kindness and unity and focus, and it's one of the most compelling contemporary jazz releases all year.