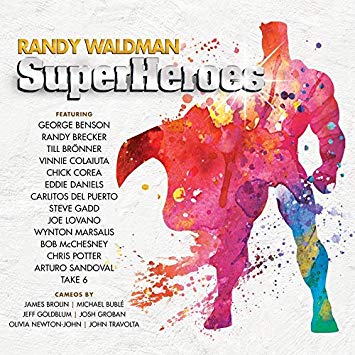 By definition, big band jazz albums should be a lot of fun. This new CD from pianist Randy Waldman, famous for his work with Barbra Streisand, Michael Buble and The Manhattan Transfer, uses a big band setting for this huge project that's centered around superhero themes. We're talking "The Adventures of Superman," "The Mighty Mouse Theme," "Spiderman" and eight more familiar tunes, all played by a star-studded cast (did I actually just use that term?) that includes Chick Corea, Wynton Marsalis, Steve Gadd, Randy Brecker, George Benson and the vocal group Take 6. Waldman also uses cameos from celebrities such as John Travolta, Olivia Newton-John, Buble, James Brolin, Jeff Goldblum and Josh Groban to push the narration forward. It took five years for Waldman to put this all together, and the result is the ultimate big budget, big band release--polished, fun and professional.

As Waldman explains the genesis of this product, he was sitting next to Adam West at an event when the two of them started talking about jazz. West was a big jazz aficionado, and Waldman walked away from the conversation thinking that "West was an actaul jazz superhero." He then enlisted the help of his own "jazz superheroes" to make this album. He uses his own jazz trio, which also includes drummer Vinnie Colaiuta and bassist Carlitos Del Puerto, to provide the core for the jazz arrangements of this famous music, which makes the overall feel less "big band" and far more intimate and focused. The big horn section provides punctuation, not to mention affirmations of the well-known themes, but the heart of the music belongs to three swinging jazz musicians. 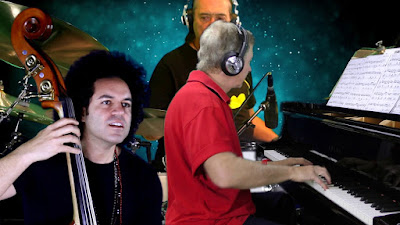 That's an excellent strategy, of course--there's a lot of people walking in and out of these songs, and it could easily devolve into chaos. Waldman keeps his piano at the center of it all, and his distinctive and melodic style is the glue that holds it all together. What makes this product live and breathe far beyond gimmickry is found in the improvisation, and how Waldman's arrangements start off with a very recognizable tune such as the theme for Batman (both from the TV show and the 1989 film), The Six Million Dollar Man and even Super Chicken and use it as a launching point for some intriguing tangents that travel great distances to highlight the musical validity of each piece. This is pretty much standard for jazz, of course--theme, improvisation, reprise--but Waldman takes it a step further by winding up at some surprising destinations. Sometimes you forget the origins along the way, but when it's all wrapped up at the end it makes perfect sense.

On the surface, SuperHeroes doesn't seem like serious jazz, and serious jazz aficionados might scoff at the idea of turning these old tunes into something that can be called legitimate. What makes this album so surprising and rewarding, however, is that it does feature some great performances, and these arrangements are inventive and skilled in their execution--even Super Chicken. The novelty is only obvious for a minute or two of each track, and then you're rewarded with some top-notch jazz from some of the best musicians in the world.
Posted by . at 8:35 AM