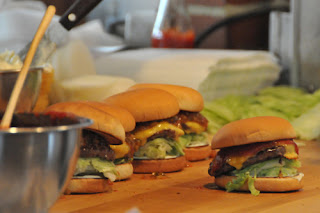 (photo courtesy of the Beef Aficionado Blog)
The Apple Pan gets my vote as The Best Hamburger in the Known Universe almost by default. For years they were my second favorite burger, living in the shadows of places like the original Sunset Grill and Don’s Place. But over the years the Number Ones have come and gone, and one day I found myself at The Apple Pan, eating one of their relatively modest, yet extraordinarily delicious burgers, and I realized that there were no longer any burgers that could best this one.

The Apple Pan is Los Angeles’ oldest surviving burger joint, dating back to 1927. The menu itself hasn’t changed since 1947, and the date still appears at the top. To talk about The Pan is to talk about the very history of the hamburger in LA. A lot of people argue about the origins of the hamburger, whether it was invented in Hamburg, Germany, or by the Earl of Sandwich, or by that place in Connecticut that still grills the meat with the same weird toaster contraption they’ve been using for a hundred years. But few argue that the hamburger first became big in Los Angeles, its popularity growing in tandem with the burgeoning film industry. And The Apple Pan was part of it all, close to the studios, serving quick lunches so that everyone could get back to the set as soon as possible.

If you could describe the dining experience at The Pan in one word, it would be terse. In fact, I’ve seen that word used at least a couple of other times when people have discussed The Pan. It’s not that anyone is rude or abusive, it’s just that the place is always crowded, and there are only so many seats at the horseshoe-shaped counter, and there will always be someone waiting behind you, wishing you would hurry up. In fact, eating at The Apple Pan is much easier if you’re by yourself. It’s real pain trying to get more than two or three seats together at the counter, and there are no tables. Just people leaning against the walls along the windows, waiting, tapping their feet, hoping you won’t go ahead and order the pie for dessert.

The service is so unbelievably quick, though, even if there is a wait. Once you sit down, you will probably be getting back up in no more than ten minutes. The guys at the counter are definitely on top of things, giving you a menu before you’ve even sat down, giving you your drink before you’ve decided what to order, giving you your fries less than a minute after you’ve asked for them. Then, they’ll pour your drink for you, throw away your used napkins before you’ve set them on the table…anything to hurry you along.

In fact, one of the strange things about The Apple Pan, and my experience with them, is that I’ve been going there about twenty-five years now and the same guy has served me every single time. I know, it’s weird. I used to call this guy The Hardest Working Man in LA because he was a model of efficiency, the greatest waiter in the history of the earth. Sure, he never smiled and barely said a word to you, but he anticipated everything. In the last few years, however, he’s gotten older and greyer and he started wearing glasses, which definitely underlines the passage of time for me. I’ve also noticed that he smiles a little more, and jokes around with the customers. He’s still the best counter guy I’ve ever seen. I don’t feel even a little bit strange when I say that I love this guy, that he has been an important part of my life and yet he probably doesn’t even remember me when I come in.

Enough of that. I haven’t even talked about the burger yet. Like I said, it’s fairly modest in size, and it doesn’t even get served on a plate. It’s just handed to you, wrapped in wax paper, probably just like they did in 1927. There are basically two burgers at The Apple Pan, the Steakburger and the Hickory Burger. The only difference is that the Hickory Burger is slathered with a red sauce that looks more like ketchup than any sort of barbecue sauce. In fact, that’s pretty much what it is, only spicier. It’s a bit off-putting when you first see it, especially if you don’t particularly like ketchup on a burger, like me. That red sauce is oozing all over the place. There’s a lot of it. But man, does it work with the rest of the burger.

The next thing you may notice about the burgers is that The Apple Pan uses neither tomatoes nor onions. I can’t think of another burger joint where there are no tomatoes anywhere in sight. In fact, I’ve heard the waiters joke about this a few times, and they all have developed quick comeback lines when people ask why. “It’s been eighty years since a tomato saw the light of day inside these four walls” was the quip I heard the last time. I’m not sure why there’s an aversion to tomatoes and onions, but I did read something about the original chef feeling that the burger was perfect the way it was, and there was an emphasis on making the burger slightly “sweeter” than other burgers of the time. Onions can make it too hot, and tomatoes are acidic. Anyways, who needs tomatoes when you have red sauce?

The patty used at The Apple Pan, as I’ve already mentioned, made me rethink cooking times and the general importance of whether or not a burger should be medium rare. After biting into a Hickory Burger, there is no pink at the center. Yet the meat is more than juicy. In fact, the patty reminds me of Kobe steak a little, mostly in the way that while it still tastes like beef, it seems like so much more, or it seems just a little bit different than everything else. It’s super beef.

And finally, it’s time to mention those fries. I do think they’re the best I’ve ever tasted. They’re not exotic like Benita’s. They’re just perfect, which means that they’ve been cooked perfectly. They’re crunchy on the outside, potato-y on the inside, and they’re not over-salted like all of the fast food fries.

I’m still waiting for a more ambitious and flamboyant burger to take over the number one spot from The Apple Pan. I’m not holding my breath. There’s something to be said for the old, the original, and the exceedingly simple.
Posted by . at 6:24 PM