The Illness' A Monument to Our Gilded Age on CD 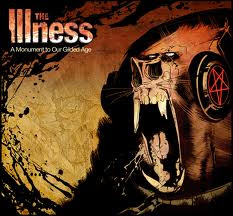 I'm as surprised as anyone that I'm digging this much metal at this point in my life, but I have to acknowledge a temporal component. Take the '70s, when I was listening to Zep and Sabbath and their brethren--the foundation is being laid, and everything is fresh and different. Then the '80s hair bands come along and feminize everything with insipid power ballads and endlessly unvaried guitar solos, and I turn my heels and embrace the New Wave for its simplicity and honesty. Then the '90s come along and I notice the new athleticism and awesome machinery afoot--the METAL is back in heavy metal--and I reluctantly check out bands such as Tool and System of a Down and decide there's something there. With the turn of the century comes a new type of shoegazing, all hopelessly angry and sullen with its anthemic we're-all-ugly-losers aesthetic and I retreat once again.

When the 2010s arrive, I sniff around and notice something new and different and yet strangely familiar. That's because we've taken what we've learned from our metallic evolution and thrown it into one big pot and mixed it all up with a dirty wooden spoon. Something old, something borrowed, something at breakneck speed. The Illness, a metal/prog/jazz band from San Francisco, is a great example of this kitchen sink ethic. You want doubled guitar solos a la Brian May? You got it. You want a spoken word piece that rails against our consumer-based society? There you go. You want speed? You want musicianship? You want a healthy dose of testosterone from your lead singer that shouts "party, party, party"? On their new CD, A Monument to Our Gilded Age, the Illness has your back.

If this sounds like a mish-mash (or as we say in the age of technology, a mashup), it's not quite that fragmented. Every song here is indeed different but in a thrillingly organized way, a winding mountain road that keeps starting and ending over and over. The winning opening cut, "Lengua de la Muerte," features the same mechanized guitar arpeggios and difficult time signatures you'd find in a Tool album, although drummer Chris Thalmann has a much lighter touch with his sticks than that monster Danny Carey. The next song, "Eyes in the Walls," eschews that introductory seriousness for a loose party vibe that mixes old Aerosmith with the rap-metal hybrid band of your choice. The third song, the title track, actually starts with a drum sample that's the cosmic equivalent of a needle scratching noisily across an entire record side. If this is Mr. Toad's Wild Ride, a certain amphibian keeps handing over the wheel to whatever beast was foolish enough to call shotgun. While the throttle is occasionally eased in softer songs such as "Slowpoke" and "Downside Outright," you'll be exhausted--or maybe elated--when Monument rolls to a close. 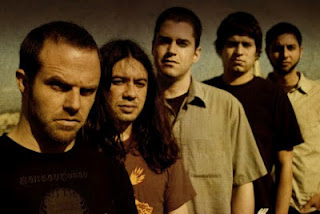 I know what you're saying--welcome to prog metal, where anything is possible. You'd be right. While ultimately I think the whole album is just a little bit over the top for my ever aging tastes, however, I do recognize a certain level of talent and skill that emerges from mix and asserts these gentlemen as someone who can catch the ball and run all the way down the field with it. The way the Illness can root around every metal cliche that's ever been passed out and whip up something novel and interesting with the resulting pile--well, that's just not that easy to do these days. But then again, even Van Halen (!) can produce a decent album in 2012--with Diamond Dave, no doubt--and these might just be the Golden Years for all genres of metal. And by that rationale, the 2020s are gonna suck it hard, so enjoy this inspired ride while you can.
Posted by . at 4:24 PM

Email ThisBlogThis!Share to TwitterShare to FacebookShare to Pinterest
Labels: the illness, the illness a monument to our gilded age, the vinyl anachronist