The Shins' Port of Morrow on CD 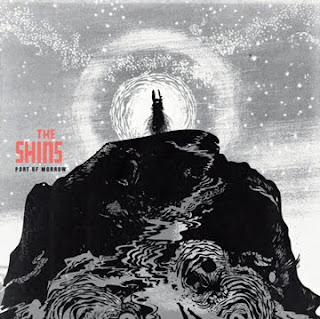 The Shins' new album Port of Morrow, their first in five years, is a really nice album. It's the kind of an album you can play for your friends and most of them will really like it, and some of them may even buy it. Play it out in public, and many people will come up and ask you what it is, and tell you that it's really good. They may buy it as well, based on the advice of a total stranger like you.

So what's wrong with that?

Well, it's just that The Shin's debut album, 2001's Oh, Inverted World, is one of my favorite albums of the 21st century. It's so unique and quirky and yet confident in its sound--it's really one of those one-of-a-kind contemporary indie rock albums like Neutral Milk Hotel's In An Aeroplane Over the Sea or The Flaming Lips' Yoshimi Battles the Pink Robots, where no one will ever come up with anything even remotely similar to it ever again. Port of Morrow sounds like it was recorded by a group of accomplished musicians who know what they are doing, and they know what their fans expect from them. It's a perfectly entertaining record, well-made even, but it just lacks that element of discovery, that feeling like you've stumbled onto something special that no one else knows about yet--exactly how I felt when I listened to Oh, Inverted World for the first time.

At the same time, Port of Morrow is the strongest Shins' album since OIW. While many people champion 2003's Chutes Too Narrow as the band's best, I always felt it was way too polished. (Someone I know once called it too "Ren Fair," which made me laugh at the time.) And 2007's Wincing the Night Away was so slight that right now I can't remember a single song from it--with the exception of the dreadfully boring un-Shins-like "Sealegs," which unfortunately received a lot of airplay in my neck of the woods and drove me crazy.

I actually like nearly every song on Port of Morrow. There isn't a clunker in the bunch. This has always been a band of chameleons, sounding different with each and every song, trying out new musical genres while stamping everything with a big SHINS stamp. The band sounds so relaxed and melodic this go-around, however, that what comes out are the gorgeous melodies, the sense that every song is designed to put a smile on your face. The first single, "Simple Song" is cheery and anthemic and uplifting, and the gentle "It's Only Life" is one of those sweet, melodic mid-tempo ballads that Crowded House did so well 15 or 20 years ago. Each song is framed with whimsical electronic touches that remind you the Shins are not commercials pop stars trying to cash in on a broader demographic. They're just capable of building some truly gorgeous and pleasing songs.

So where does this all fall short? I think it begins and ends with James Mercer's ever-distinctive singing voice. It's gotten to the point to when he's singing, you instantly know it's The Shins. When he isn't, you don't. On Oh, Inverted World, the entire band had an instantly recognizable sound. Now they remind me of someone like Elbow, a perfectly fascinating band with a remarkable singer, a compelling musical vision and not much else. In other words, you won't be thrilled with the amazing drumming or the fantastic guitar work. It's all a smooth, congealed whole. In 2012, The Shins are dangerously close to becoming the James Mercer Band. 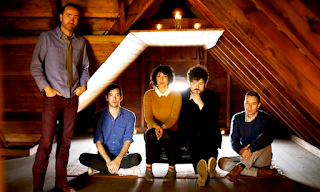 That's not a terrible thing, of course. While Mercer does occasionally recycle himself from past albums (the chorus of "Simple Song" sounds almost identical to one of those songs I can't remember on Wincing the Night Away), his voice has evolved into something mature, comforting and singularly interesting. He's now what you would call a genuinely accomplished singer, much less yelpy and high-pitched than he was a decade ago. And that observation pretty much covers it--the Shins are mellowing and aging with their fans, like so many bands before them. They're never going to challenge everyone with their Kid A, they're never going to put out a reggae album, they're never going to do anything but write and perform Shins songs and make their fans happy. I can live with that.
Posted by . at 9:46 AM

Email ThisBlogThis!Share to TwitterShare to FacebookShare to Pinterest
Labels: the shins oh inverted world, the shins port of morrow, the vinyl anachronist