"Thank you, Marc! I can confirm that for the recording of this Part II the orchestra was not in mixed voices. Here's the drawings of the stage layout and session photos:" 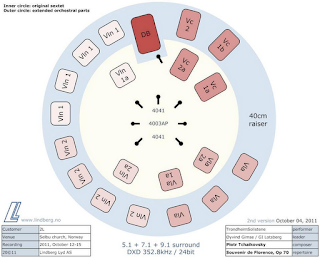 The notes accompanying this diagram say the following:

"Preparing for recording Tchaikovsky’s “Souvenir de Florence” with TrondheimSolistene next week. Originally composed for a string sextet, Øyvind Gimse has expanded the score to chamber orchestra. Our planned stage layout will hopefully capture the dynamic between the sextet in the inner circle and the full orchestra surrounding them in an outer raised circle."

For comparison, here is the layout for Souvenir Part I, which is indeed a mixed voice orchestration: 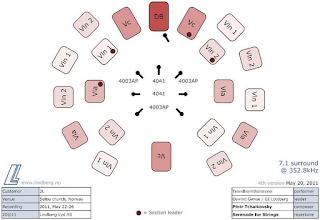 Thanks for the clarification, and congratulations on such an amazing sonic achievement!
Posted by . at 5:32 PM