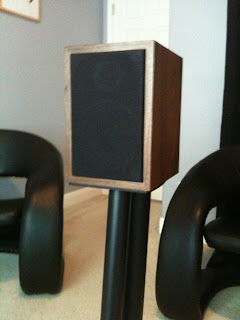 When I first announced that I had received the My Audio Design (MAD) 1920 loudspeakers from Timothy Jung, the CEO of this UK speaker company, I wrote it like this: "My Audio Design 1920 Loudspeakers are in the house!" Of course this sounds like the name of the company is Audio Design (a rather boring name), and I was telling the world I had just bought a pair and they were mine, all mine. But the name of the company is actually My Audio Design, also known as MAD, which is a bit more interesting. Their website is www.madengland.com, which peripherally suggests either Mad England ("they've gone bloody berserk on that side of The Pond!") or Made in England--again, a bit dull. I vote for MAD England! (add as many exclamation marks as you feel appropriate) as my favorite name for this relatively new manufacturer, but Timothy is fond of just My Audio Design, which delivers the message that these hand-crafted speakers are bespoke and designed to fit your listening room perfectly. Yours, not mine or anyone else's.

The 1920 is their smallest and least expensive speaker to date. It's been plugged by a few others as a "tribute" to the classic LS3/5a, but it's far more than just an updated version like the Stirling Broadcast LS3/5a monitors that were introduced just a few years ago. While the front baffle is roughly the same size as an LS3/5a, which is to say very small indeed, the 1920 is probably about 50% deeper, more in line with modern speaker dimensions. The 1920 is also ported in the back, unlike the sealed LS3/5a, and it is far more efficient at 90 dB. (The older speaker had an efficiency of just 82-83 dB, but there were versions with impedances of up to 16 Ohms, making them fairly easy to drive.) 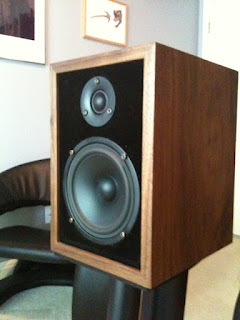 So adding some cabinet depth, a port and a little more efficiency sounds like a recipe for "LS3/5as on steroids," and I have to admit that my first impressions of the 1920 did remind me somewhat of the BBC classic. There's that gorgeous, clear and lifelike midrange, coupled with imaging and soundstaging that epitomize the reasons why so many audiophiles still choose small two-way monitors for fairly expensive systems. What the 1920 offers over the BBC monitor, not surprisingly, is deeper bass, better dynamics and a larger soundstage. The LS3/5a was famous for its "boosted" upper bass frequencies that made the tiny speaker appear to go much further down in the bass than they did. The 1920 delivers its low frequencies--they are rated down to 58 Hz--more honestly. (In comparison, the BBC monitors went down to about 80 Hz or so, depending upon vintage.)

That's not surprising considering the 1920's woofer is more than an inch larger than the older speaker, and the enclosure is so much deeper. But when facing the 1920s in your listening chair, you will still be surprised at how big they sound for such a small speaker. In a nutshell, that fans of the older BBC monitors who are looking for a modern-day equivalent of the LS3/5a with more guts, more glory and more bass will be supremely thrilled with the 1920. I do admit that it's tough to make this assertion without a pair of the old Rogers, Chartwells, Goodmans, Spendors or Harbeths also sitting in my listening room, awaiting their turns, but the 1920s did a fabulous job of reminding me why those old BBC monitors are still prized--and very expensive on the used market. 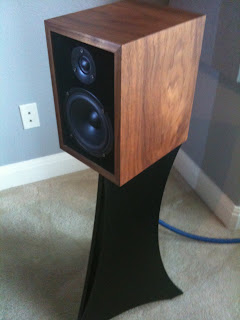 The 1920s give you everything those speakers did right--midrange clarity, beautiful imaging and soundstaging and amazing nearfield monitor capabilities--and add dynamics, deep bass response and a much better level of fit and finish. The 1920s eschew the sloppy, Velcro-riddled baffle of the BBC designs for a sleek felt surface and very high-quality custom drivers. The cabinet itself is understated yet gorgeous, with thick sides and a rich walnut veneer that are beautifully finished.

My only reservation about these speakers are their rather polite high frequencies. They really do sound like the classic, refined British monitors they are, and if you've been listening to something else more dramatic and expressive you might be put off by that stiff upper lip. I also found that despite their 90 dB sensitivity, the 1920s needed a little extra juice to really open up. With my 27wpc Unison Research Sinfonia tubed amplifier, the 1920s sounded a little congested through the mid to lower treble. Once I switched to the 90wpc Unison Unico Nuovo hybrid integrated, the 1920s cleared their sinuses and relaxed. 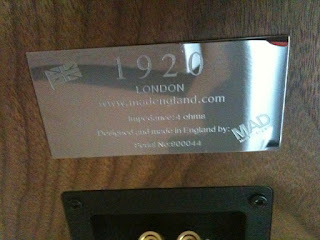 That, of course, brings up the price of the 1920s. They are not an inexpensive solution for people who want pristine LS3/5as and can't afford them. They are a true made-in-the-UK monitor that surpasses the original speaker in almost every way. To judge the 1920s based on price, you have to research how much a pair of flawless LS3/5as cost on the used market, which can be $1500, $2000 or more. I once saw a pair on eBay that were rare and special for one reason or another, and they sold for over $3000. The Stirling Broadcast LS3/5as, introduced in 2007 or so, retailed for $2000 per pair--plus you had to add on an extra $1000 for the Cicable external crossovers which added more depth and air to the presentation. That's $3000--probably around the price the 1920s will sell for when they hit the United States. For that kind of money some audiophiles may choose bigger speakers that offer more fireworks. But those listeners never really got the classic British sound in the first place, and scoff at the very idea of a mini-monitor that can actually perform better than a big loudspeaker in a wide variety of ways.

But if you're Jonesin' for a bigger, beefier version of the classic BBC monitor sound, you need to get MAD. The MAD 1920s, I mean. They're evocative and sexy, in a David Niven sort of way.
Posted by . at 8:12 PM