A Visit to Amoeba Berkeley 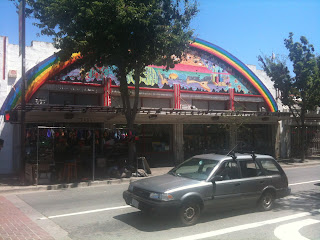 No visit to the Bay Area would be complete without a visit to one of the greatest record stores in America, Amoeba Records in Berkeley. I visited the Amoeba store in Hollywood on several occasions, but I'd never wandered into the original location to the north. After receiving the somewhat distressing news that my favorite record store in the world, Millenium Records in Portland, may be closing its doors, it's comforting to know that this vinyl landmark is still thriving and offering an insanely complete collection of LPs to its customers. 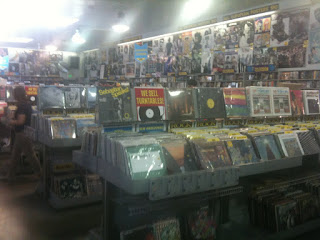 Colleen and I had a couple of hours to kill before heading over to Yoshi's in Oakland's Jack London Square for some sushi and an evening of jazz with the Ravi Coltrane Quartet. That was torture, because I could spend days rummaging through Amoeba's aisles and two hours was quite simply NOT ENOUGH TIME. I had to ask myself the difficult question, "What LPs have I been looking for?" My first two choices, Wheedle's Groove and the new reissue of Neutral Milk Hotel's On an Aeroplane Over the Sea, were nowhere to be found, so I started speed shopping and came up with a handful of choices. 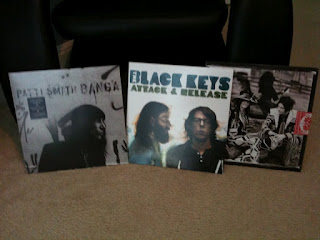 I wound up with the following LPs: Icky Thump by the White Stripes (I only had the CD version, and the LP version was remastered by Steve Hoffman and Kevin Gray at RTI), Attack and Release by the Black Keys (I'm working my way backward through their catalog) and Patti Smith's new album, Banga. I flirted with the idea of paying through the nose for a mono Parlophone pressing of Sgt. Pepper, but I ran out of time and had no idea where to look. (I hate asking for a help in a record store about as much as I hate asking a stranger for directions in the middle of nowhere.) 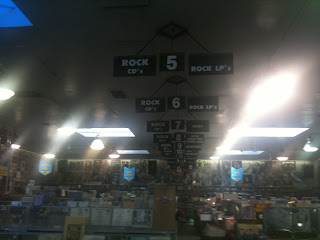 As I said, Amoeba is huge, and it would take dozens of visits to get a reasonable survey of their stock. I was impressed by their punk selection and toyed with the idea of grabbing a couple of LPs for my younger brother, but he doesn't have a turntable. (If it was on CD, he told me when I returned, he probably already had in it his massive music server files.) 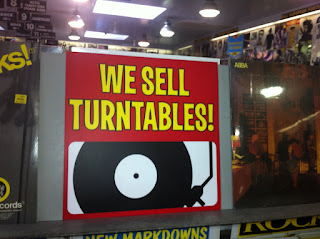 Yes, Amoeba sells turntables according to numerous signs. But before you get all excited, I found three turntables--a $149 Numark DJ turntable, a $149 Audio-Technica and a $249 Music Hall USB turntable. Even Millenium offers a handful of Regas and Pro-Jects. That, however, was the only disappointing things about Amoeba. I can't wait to go back there with a little more time on my hands and a little more green in my wallet.
Posted by . at 3:40 PM