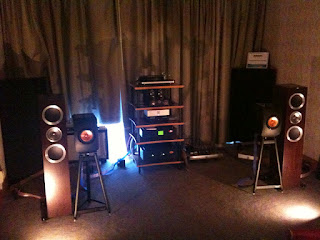 It's nice to take a break from the Texas heat in the middle of the summer to attend an audio trade show somewhere cool, oh like San Francisco perhaps. The Third Annual California Audio Show from Dagogo certainly fit the bill, and we soaked in the cool temps and listened to some outstanding stereo systems. Based on the attendance, I'd say the show was a huge hit--our room was consistently packed. The steady stream of audiophiles in the Cypress I room was undoubtedly due to the US debut of the Kef LS50 nearfield monitor speakers, a remarkable speaker for just $1499 per pair. 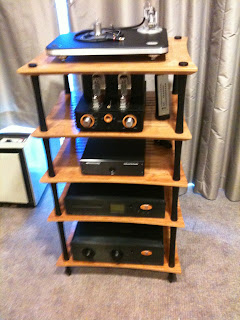 While our dealer took several orders in advance for these little gems, I felt a surge of pride when someone bought our Unison Research Simply Italy integrated at the end of the show. Relatively few audiophiles can "hear through" a pair of speakers to recognize the excellence of the amplification that is driving them, but thank goodness a handful of seasoned listeners were able to identify just how well the Simply Italy, as well as the more powerful Unico Seconda hybrid integrated, powered both the LS50s and the larger Kef R700s in the room. Credit is also due for the outstanding Clearaudio Ovation turntable and Talisman cartridge, the Musical Surroundings phono preamp, the Nordost cabling and power management and of course our Unison Research CD Primo CD player. I really like the black faceplates; we've been mostly selling the standard silver. 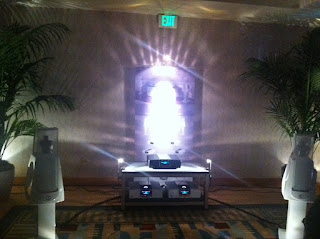 Our system certainly delivered the goods, but Colleen and I did hear at least one other system that really satisfied. What you see here is the more modest Corona system from mbl, which featured a C31 CD player, C32 power amplifier, C11 preamplifier and Radialstrahler 120 monitor speakers for a total system price of $49,000. That's not chicken feed, but when you're talking about mbl, whose larger individual components generally cost way more than that, it's an amazing system that sounded powerful and detailed--all you could ever want for first-class sound. I could easily live with this system for the rest of my life (as long as I could include the turntable of my choice). 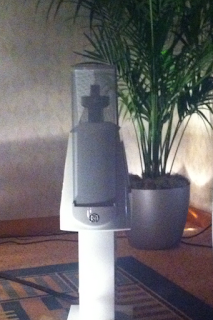 The only downside is the vaguely religious appearance of the small mbl speakers--perhaps this is the perfect system to listen to recordings of Arvo Part, the Mormon Tabernacle choir and Virgil Fox. We were, however, treated to two extraordinary pieces of music--the California Guitar Trio performing "Bohemian Rhapsody" and a German children's choir singing their version of Metallica's "In the End It Doesn't Even Matter." Thanks, Jeremy! 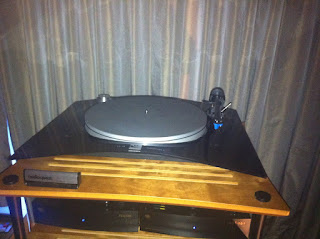 Remember this turntable? It's a working version of the Margules Audio Torna I've been talking about for a couple of years now. Now it's called the Magenta TT-10 and with a modest Rega arm and Elys cartridge it offered a nicely solid sound that will make it a true bargain. I can't wait for the final version! 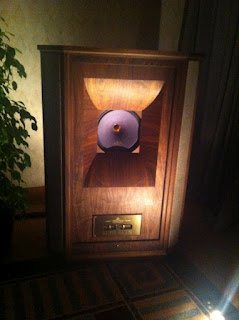 I also caught up with one of my favorite speakers in the world, the Tannoy Prestige Royal Westminsters, in the Blue Moon Audio room. Powered by mostly Cary amps and sources, these giant speakers are beautiful and delivered a GIANT sound in a GIANT room. When I finally buy that estate in the English countryside, these will be the speakers I purchase. 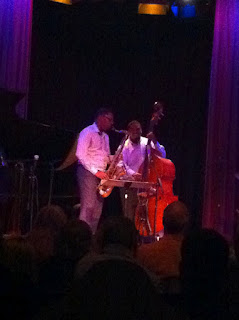 I also heard excellent sound from the diminutive Magico Q1 monitors driven by Constellation amplification and sources--nearly perfect from about 60 Hz on up--as well as a system featuring the new $200K Wilson Audio Alexandria XLF speakers. Cap it all off with seeing the Ravi Coltrane at Yoshi's in Oakland, and it was definitely a show to remember.
Posted by . at 7:00 PM