Transfiguration Phoenix Has Stopped By for a Visit... 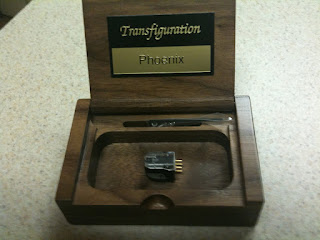 It's been an interesting week at CCI headquarters. First we get the PureAudio Vinyl phono preamplifier in for evaluation (and after four days, it's getting better and better), and now I just received a Transfiguration Phoenix cartridge from Bob Clarke. Bob runs Profundo, the US distributor of Heed, Trenner & Friedl, VivA and Transfiguration, and we're teaming up with him, as well as Dan Muzquiz of Blackbird Audio, for the upcoming Rocky Mountain Audio Fest in October.

Even though we're sharing a room with Bob, we'll each have a separate system that shows off our latest gear. Profundo will be showcasing such new arrivals as the Trenner & Friedl Pharaoh loudspeakers and the recently updated Phoenix, and Colleen and I will be showing off the Unison Research Simply Italy integrated and perhaps the upcoming Opera Grand Mezza loudspeakers. It'll be similar to the Hootenanny we had last year at Whetstone Audio, where Bob and I took turns playing music, but we've already agreed to forego the "you've been served" back-and-forth musical challenges.

Here's where the Transfiguration comes in: Profundo doesn't import a turntable (although Bob is very fond of Basis, a US company), and CCI doesn't import a cartridge other than the Unison Research UN1 that comes with the Giro turntable. The UN1 is a fantastic cartridge for the money, but it's basically a $550 moving-magnet. We wanted to up the ante for RMAF and feature a first-class analog rig, so we're pooling our resources and going with a much more ambitious moving-coil. I've been given the job of breaking this Phoenix in. I know, it's a hard job but I'll manage.

I'll mount this tomorrow and give initial impressions in a few days. I'm expecting great things, especially with the Phoenix matched to that utterly fantastic phono stage from New Zealand.
Posted by . at 11:27 PM