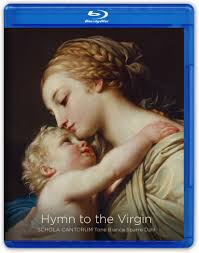 That's a word my audiophile friends and I used to bandy about--usually when talking about equipment. My late friend Steve Zipser, who used to own Sunshine Stereo down in South Florida, used this adjective whenever he approved of a specific piece of gear he sold. I used to think it was an odd word when I first heard it; music was glorious, and gear was just an end to that means. Over the years, however, I have used glorious once or twice to describe gear whenever a heavenly sound emanated from a pair of more-than-competent loudspeakers. I always felt a little strange doing it.

When listening to the latest Blu-ray audio/SACD disc from 2L recordings, Hymn to the Virgin, I immediately thought of the word and felt utterly comfortable in applying it. Like Song from the Uranienborg Vokalensemble that I just reviewed a couple of weeks ago, Hymn is full of sacred choral music that is, of course, utterly glorious in the way it can transform the mood and disposition of a thoroughly secular person such as me. Comprised of short pieces from well-known composers such as Benjamin Britten, Francis Poulenc, Eric Whitacre, Sergei Rachmaninoff and a personal favorite, Arvo Part, this is rich, textured choral music that will force you to tiptoe across your listening room in an penitent, God-fearing manner--even if you're a fellow heathen.

Sung by Schola Cantorum and featuring soloist Tone Bianca Sparre Dahl--a name that is in and of itself glorious--this recording is somewhat richer and more forceful than the delicate Song. When I posted that review, a man replied on the 2L Facebook page that he was troubled by my comment that Song featured an approach that favored individual voices and allowed the listener to follow singular musical threads with uncommon ease. This gentleman thought that choral music should be composed of a more homogenous sound, that chorales often strived to sound more congealed in order to magnify and multiply the power of the human voice. Perhaps he'll find that Hymn to the Virgin meets his expectations in a more predictable way, although I hate to use that particular adjective when describing a 2L recording. Throughout the recording we are treated to wave after wave of grouped voice, powerful and united, and positively hypnotic in the way the sections of the chorus weave in and out of each other to build a cumulative strength.

In describing these recordings from 2L, I've always commented on the acoustics of the recording venue. More often than not, it's a Norwegian church. This time is no different, with Morten Lindberg recording the vocal ensemble at the Garnle Aker church in Norway, but this is perhaps the most resonant place yet, a true and distinctive performer like never before. As the title suggests, these pieces are devoted to the Virgin Mary, yet mated to a thematic undercurrent courtesy of Sir Thomas Aquinas: "Music is the exaltation of the mind derived from things eternal, bursting forth in sound." The interior boundaries of the church guarantee that the sound does burst forward, full of startling dynamic contrasts that create an unparalleled sense of passion in the music. What a magnificent venue this is. 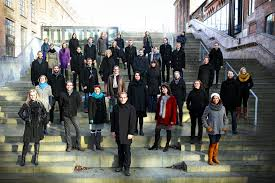 I attemped to review Hymn to the Virgin before I moved to Colorado; I listened to it shortly after reviewing Song and found it difficult at first to differentiate between the spirit of each recording. I'm glad I waited. My new listening room in Colorado is enormous, close to twice as big as my Texas listening room, and this increased volume allowed Hymn to the Virgin to bloom in unexpected ways. First of all, this is a much larger vocal ensemble (I count 35 or 36 people in the photos included in the liner notes) and I appreciate the way the increased space allows each member to contribute to a greater whole. While Song celebrates intricacy, this recording is more about energy and momentum and will push the limits of your system as few voice recordings can. That indeed is a truly glorious thing.
Posted by . at 6:33 PM