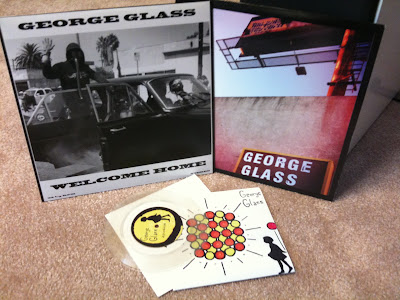 I mentioned a few days ago that I received a nice little package from the band George Glass. Besides the fun 45rpm single of Sunshine I just reviewed, I also received the vinyl copy of their new album Welcome Home (which I reviewed here in July). Finally, the band included their eponymous debut EP, which was released in October 2011...just a few months after Sunshine.

I won't spend a lot of time comparing the CD and LP versions of Welcome Home--because I can't find my CD copy! I know I was listening to it in the car as we moved from Texas to Colorado, but now it's nowhere to be found. I will say that the vinyl pressings of all three releases are clean and pristine and sound wonderful and contain plenty of extras such as MP3 downloads, mini-posters and more liner notes than I got with the little silver disc. Hearing this on glorious vinyl only reminds me of the strengths I recognized in the original review--the easy slips between genres, the earnestness and an unusually sunny disposition. 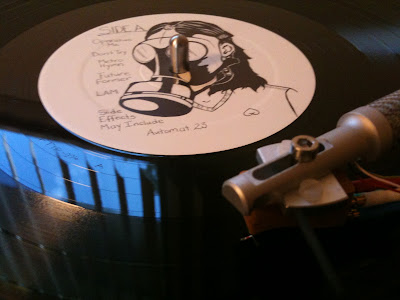 Listening to the 2011 EP, however, was a small revelation. George Glass is more about guts than versatility, with almost all of the songs representing the straightforward rock that makes up about a third of Welcome Home. There's a greater sense of cohesion between the tunes, and more of a live feel. Welcome Home is more of a studio creation, more clever and filled with risks--and there's also all those gorgeous songs that have been laced with feel of Americana, which I feel is their direction for the future. This earlier release sounds more like it was captured on a stage in a single take. It sounds more immediate and exciting, and a little more road-worn.

Here's another way to describe it: go back to my original review and find my comments on the song "Patchwork Girl." This older album definitely has more of that loose, unbridled feel.

In other words, George Glass is a band that's already maturing and branching out. And like a thousand other bands, there'll be fans who like the real early stuff best. I like it all so far. You can check out the George Glass collection as well by visiting their bandcamp site.
Posted by . at 10:15 PM