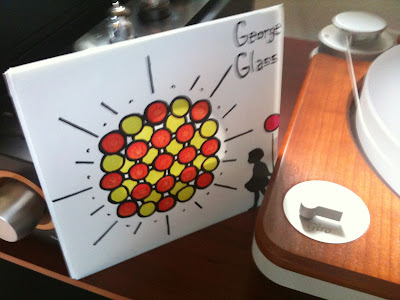 I just received a nice little thank you from the band George Glass after reviewing their excellent new album Welcome Home...vinyl! First up is this fantastic little 45 single, 2011's Sunshine, pressed in clear vinyl. While I have quite a few 45rpm singles in my collection, this one is novel because the clear vinyl looks amazingly cool sitting on the clear acrylic platter of my Unison Research Giro turntable. In addition, it's also probably the only 45rpm single I own that includes an MP3 download!

The three songs contained on this 45rpm single are cool as well. The opening title track is a mini-suite of sorts and attempts to morph into every rock genre in the '70s...acid rock, prog, power pop and then back again, all without sacrificing the basic melody of the song. The B-side is no slouch, with a charming cover of Arthur Lee's "Gazing" and a crisp, catchy closer titles "Lil Wiz." All three songs are carefree and fun, just the thing I needed after listening to Swans' The Seer all the way through for the first time. 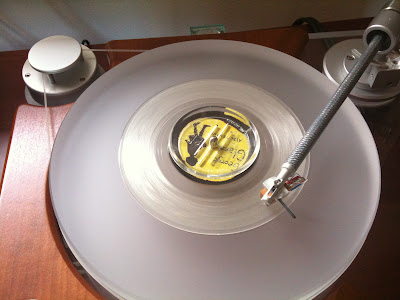 How about you? Are you still listening to 45rpm singles? Which are your favorites? Don't I sound like one of those audio mags or record stores trying to pump up the likes on their Facebook page? At any rate, it's a good question since most vinyl lovers I know still stick primarily to 12" LPs. 45s, however, are fun. Sure, you have to get up every three to five minutes to change the record--which was one of the original and somewhat dumb reasons for abandoning your record collection for CDs. Vinyl is exercise. It's good for you.

George Glass also sent me the vinyl LP version of Welcome Home, as promised, as well as their eponymous 2010 debut, also on vinyl. I'll report shortly on those. Suffice it to say that while I liked Welcome Home a lot when I first heard it and gave it a positive review, this band is really starting to grow on me. If you'd like to check them out, visit their Bandcamp site.
Posted by . at 2:52 PM