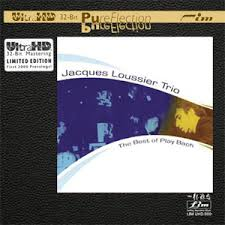 When the gentleman in the FIM room at the Rocky Mountain Audio Fest pointed to the Jacques Loussier Trio's The Best of Play Bach CD and told me I should grab it because they were going fast, I suspected it was mere salesmanship. "There are only a couple left!" he exclaimed. Since I wasn't familiar with Jacques Loussier, much less this recording, I smiled politely and made another selection. When Dan Muzquiz visited the FIM room later that day and returned with it, I said, "Oh, that's the one I was supposed to buy...let's give it a spin and see what I missed out on."

Dan, of course, was familiar with the Play Bach recordings--J.S. Bach standards such as Toccata and Fugue in D minor, Air on a G String and Joy of Man's Desiring played by a jazz trio--and was surprised that I opted to purchase something else. After just a few seconds of listening, I realized my mistake and headed back to the FIM room and purchased the second to last copy. That's when I realized that no salesmanship was involved, and that The Best of Play Bach was the hot recording to play at RMAF.

To be succinct, the hi-rez FIM version of this already stellar recording is flat-out one of the best reference CDs I've ever heard...dynamic, realistic, intimate and exciting. Loussier started recording his take on Bach classics in 1959, and this recording is a compilation that was originally released by Telarc in 2004. Despite the long timespan involved, these recording sound so consistent from one selection to the next--as if they were collected in the same sessions. While the novelty of the arrangements is probably the most noteworthy aspect of these recordings, what really impresses me the forward, robust sound of the piano and how everything--the pedal work, the decay, the sweep of the board--is captured so well. If you're one of those audiophiles who evaluates gear by how well the sound of a grand piano is reproduced, this will quickly become your standard. 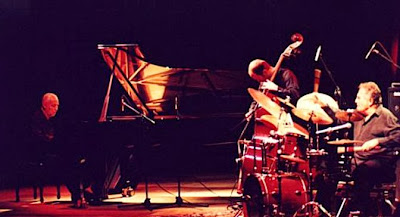 As I said in my review of the other FIM recording I bought at RMAF, Happy Coat, this recording is a flashy show-stopper rather than a piece to relax by, and I slightly prefer the Shota Osabe recording for its warmth and comforting sound. But if you want to impress your audiophile buddies, The Best of Play Bach, will certainly get the job done. These FIM recordings are simply amazing when it comes to proving that there's still hope for redbook CD playback in 2013.
Posted by . at 1:53 PM