The Chronicles of Sydnia, Part 6: Redgum Audio, the Axis VoiceBox and Carlton Ale 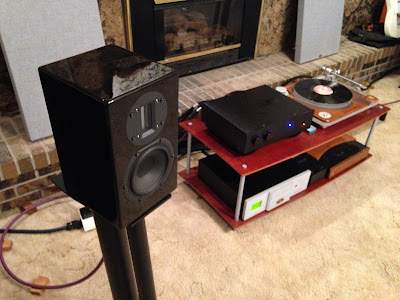 This is a current photo of my main listening room, where I have substituted a rather basic black box of an integrated amplifier for my usual glowing tube amplifiers. To tell you the truth, I've needed an amplifier like this for a while--something with high current, something that can drive just about anything, especially when I'm entrusted with a loudspeaker with fairly low efficiency--such as the 83 dB, 5-ohm Axis VoiceBox S that we distribute here at CCI.

I'm reminded of my old Naim NAIT 2 amplifier, that diminutive and legendary little black box from the UK that offered about 18wpc. Back in the early '90s, my little NAIT did a pretty decent job of driving my 84 dB Spendor S20s--as long as I didn't crank up the volume too much. (I lived in a small one-bedroom apartment in Encino at the time, so I wanted great sound at low SPLs.) How did this combo work? The NAIT was a high-current design, and the Spendors had a fairly benign 8-ohm impedance. It was my first taste of true high-end sound. It was the perfect apartment system for me. 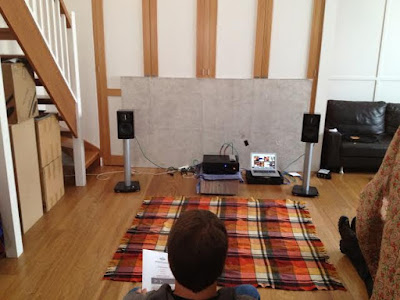 This particular integrated amplifier is the Redgum Audio RG1 35 ENR. Since my return from Australia, I've spoken with several of my dealers here in the States and many of them remember this venerable brand from a few years ago. What they remember most is the lovely wood--or as they say Down Under, "timber"--faceplates, as well as the novel key that's inserted on the front panel and turned to turn the amplifier on. The RGi 35 ENR doesn't have that same gorgeous front, decked out in the trademark redgum front--it's part of the new Black Series that represents the entry-level line for Redgum. It doesn't have the key, either. But this little 65wpc integrated amplifier has something I need--the ability to drive whatever speakers I have on hand for evaluation. In fact, this amplifier is well-known in Australia for being able to drive the smaller Magnepan speakers to fairly loud listening levels.

So how did I wind up taking this amplifier home with me? John Reilly, who designed the Axis VoiceBox S loudspeaker with Brad Serhan and manufactures it, shares factory space with Ian Robinson of Redgum. While I was meeting with John in Sydney, he suggested that I meet Ian and listen to his products. I remembered Redgum Audio as well, and I once heard a system driven by Redgum amplification and I really liked it. So John called Ian in Melbourne and he headed out to Sydney with the RGi 35 tucked underneath his arm. (Okay, the Redgum isn't small like the NAIT, so a little more effort was required.) 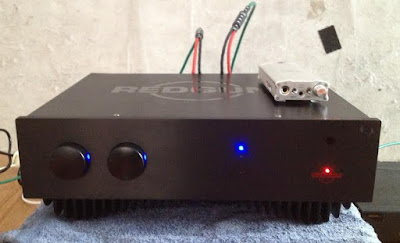 The first question I have to ask an overseas manufacturer when they want me to hear their product is, "What makes your product special, and how can I sell it in the US?" That, of course, mirrors the questions my dealers will ask me about the product, questions such as "How is this different from other similar products in the market?" and "How do I sell this to my customers?" Most of all, dealers want a story to tell, and the answer has to be better than "It sounds really good for the money." At first glance, the Redgum amps are the proverbial black-box amp, simple and a bit of an anachronism--if simple two-channel audio, within the context of its current resurrection, can be called that. As an audiophile, I've always leaned toward simple integrated amplifiers since my system usually just includes speakers, an analog source and a digital source. I don't need a fancy amp, in other words.

This simple black box had some unusual features, however. First of all, when I asked Ian if he had a 110V version for US, he informed me that his amplifiers could do both 110V and 220V--a sensor within the amp uses relays to choose the right power setting. I'm not sure if that's a big selling point for US audiophiles, although I do occasionally have customers who live in more than one country and would love an amp with this feature. As an importer I dig this feature because it means I won't have to wait longer for special "US" versions to be shipped, which can often lead to delays.

The second unusual feature is the way the inputs are marked. Instead of such dated input labels as "tuner" or even "CD," the five inputs are color-coded. Each color is represented on the front panel with a corresponding colored LED on the front panel. Input selection is accessed through the remote control, which leads to a cleaner, more streamlined front panel. You can even ensure that the batteries on the remote are fresh by pushing a button labelled "MAGIC" which makes the relays in the amp click a few times. Other interesting features include passive preamplification with dual volume controls, a massive power transformer with power output MOSFETs and a huge "sine-wave" heatsink on the bottom of the amp that elevates the chassis for better ventilation, and adds a distinctive look that does manage to make this simple black box look like no other. There's even a smart phone app that can replace the remote control's basic operations. 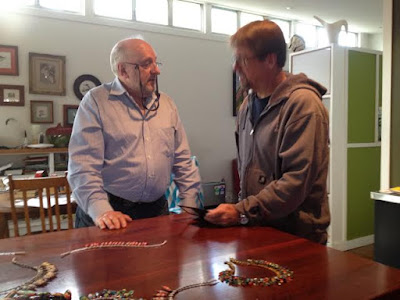 Hanging out with Ian and John was a real pleasure--they're both "blokes" in the true Australian sense of the word. We spent a few hours talking about the Redgum products, and then we set out to put the smallest Redgum through its paces. As I said, the RGi 35, at 65wpc, is the smallest amp in the line. The Black Series also includes the 125wpc RGi 60 ENR and the 175wpc RGi 120 ENR. All three amplifiers are identical on the outside--it's the power inside that's different. Due to my best calculations, performed while the Australian dollar experienced some instability over a period of a couple of weeks, these amps should retail in the US for about $2500, $3500 and $4500.

Paired with their soulmates, John Reilly's Axis VoiceBox S, the RGi 35 ENR was able to extract more bass control from those very revealing studio monitors than the lower-powered tube amplifiers I've used up to this point. Ian has designed his amplifiers specifically for speaker loads that dip below 4 ohms. The Axis sits at 5 ohms, and while I've been able to drive them with as few as 22 watts per channel, I've always felt that the Axis VoiceBox needed a little more juice to realize their true potential. I was right. I've never heard the VoiceBox sound so effortless and dynamic as they did with the Redgum. 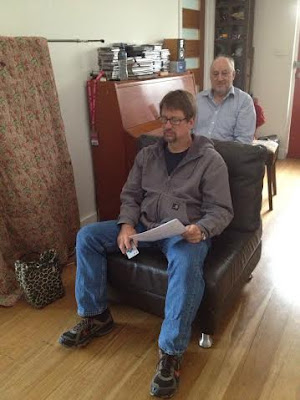 During our voicing of the Brigadiers Audio speakers, we had plenty of expensive amplification sitting around. While we kept gravitating toward the AU$16,000 Einstein integrated for its ability to stay out of the way of the music, we kept going back to the modest Redgum for its ability to project a powerful, dynamic and clean sound. Not bad for a $2500 integrated!

So I've brought the Redgum back to the States for further evaluation, which is code for "deep down I'm still an audiophile and nothing thrills me more than to have seat time with a new product." After a few weeks I'm obviously considering bringing Redgum back to the US. The utilitarian looks might not be for audiophiles who are looking for audio jewelry adorned with precious metals, glowing meters and rare wood accents, but Ian still manufacturers his classic Signature Series with the timber (or is it "timbre"?) faceplates for a little more money. But I'll tell you what the Black Series is--it's the Workhorse Series. It's the amplifier for the audiophile who needs to power something like a Magnepan but doesn't want to spend a fortune on the watts needed to make those huge panels sing. And while many in the audio industry say "watts are cheap," implying that you can find a powerful amp for not a lot of money, those amps often lack subtlety and musicality--unlike the Redgum. 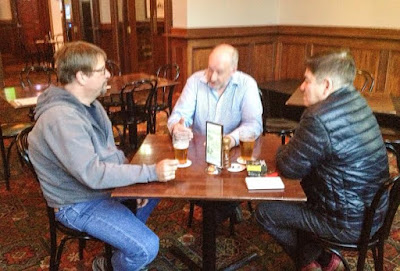 After our listening sessions, John asked me if I'd been to an Australian pub yet. When I replied that I hadn't, both Ian and John took me to a local pub where we enjoyed a Carlton ale on draft (or is it "draught"?). I didn't know of Carlton ale--my experience with Australian beer has been confined to those really big cans of Fosters. After a long day of listening, that smooth, creamy Carlton really hit the spot. That's a feeling I could grow to love--a hard day of work, and then a pint or two of Carlton's with a couple of my mates before going home for the evening.

And, as usual, if CCI starts importing Redgum to the States I will stop telling you how great these amps are. But until then, yeah, I really enjoy the power, control and simplicity of the RGi 35 ENR.
Posted by . at 5:07 PM