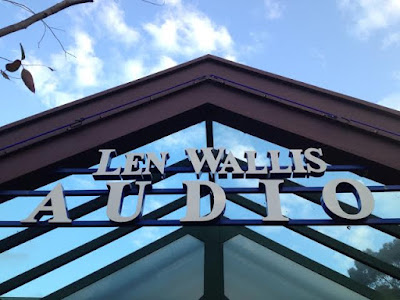 As high-end audio importers and distributors, Colleen and I currently service 23 dealers in the US. As far as business models go, CCI has an even mix of brick-and-mortar stores and dealers working out of their homes. We even have one or two dealers who rely primarily on internet sales, even though we are an old-fashioned distributor and strenuously protect our dealers' territories. The latter group, of course, is reserved for customers who do not have a local dealer nearby. All of these dealer types have their pros and cons--home-based dealers, for instance, don't have to deal with the high overhead of a store and are able to offer demonstrations that closely approximate the customer's home environment, and more and more of these dealers are popping up all over the world.

This flexible model, which usually operates on an appointment-only basis, is certainly the way I shopped for years with Gene Rubin Audio--I really appreciated the one-on-one attention I received from Gene and I felt I made better buying decisions in such an environment. But I miss the old hi-fi stores, and the ability to stroll into a showroom and see all the equipment I've heard about in person. I still love to walk up to equipment and see it up close and perhaps even touch it--especially if no one is watching.

That's one of the reasons why Len Wallis Audio in Sydney was such a genuine treat, a well-needed respite toward the end of my Australian trip. 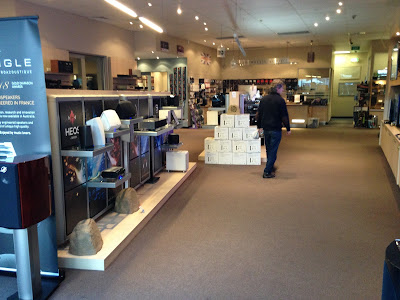 Walking in the front door, I felt chills as I saw the sales floor filled with tons of high-end audio equipment spread out everywhere, with listening rooms carefully positioned along the perimeter of the store for more careful auditioning. Suddenly I was transported back to the late '70s and early '80s, during my audiophile apprenticeship, where I could wandering among the set-ups and experience all these lovely machines in all their glory.

Brad Serhan wanted me to meet Len Wallis, who has been part of the Australian hi-fi scene for decades. In fact, I even knew who Len Wallis was before Brad even mentioned his name. So on the second-to-last day of my Sydney excursion, Brad and I headed out, unannounced, to Len Wallis Audio. 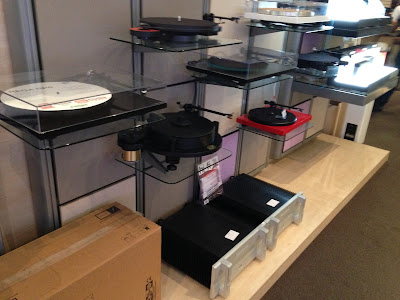 When was the last time you went to a hi-fi store in the US and saw dozens of beautiful turntables in a static display right when you walked in? And I'm not just talking about budget turntables. For instance, Len Wallis had the entire Rega turntable line sitting front and center, even the new RP10. Brad was amused as I darted all over the showroom saying, "Oh, they have this!" and "Wow, I've never seen one of these in person before!" 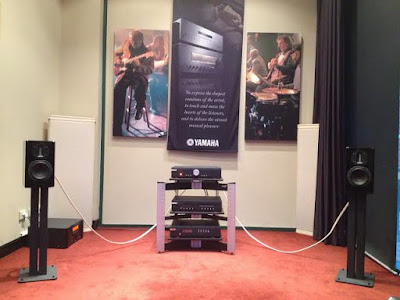 The first listening room I entered, just off to the right as we entered the store, featured a system that used the Axis VoiceBox S speaker. I mentioned that our trip was unannounced because Brad was so happy that one of his designs was featured so prominently in the store. "Len had no idea we were coming today," Brad explained. "So he didn't put these here just to make me happy!"

As it turns out, Len Wallis is the Australian distributor for Axis, and he told us that the speaker was really starting to take off in Sydney as THE 2-way monitor for his customers. We even spoke to one of Len's salesmen, who told us that he and the rest of the sales staff were discussing the most interesting new products in audio over the last few years and four out of the five salesmen said, "The Axis VoiceBox." That's comforting to Colleen and me since we've been working hard over the last year to spread the word. 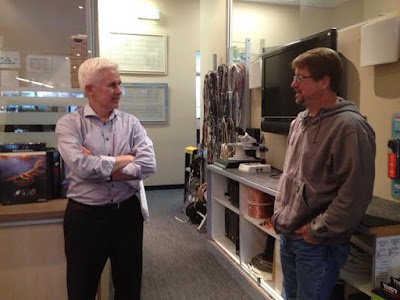 Len, of course, was the exact opposite of the snobby high-end dealer so many audiophiles despise. Warm, friendly and full of enthusiasm, Len loved talking about audio as much as I do. He'd even been reading about my adventures in Oz and was hoping he'd get to meet me while I was there. We chatted for a while even though Brad and I had arrived unannounced and he was in the middle of a very busy day.

This, of course, underlined something I already knew: Australians as a group are friendly and outgoing and so nice to deal with. I'm certainly not saying you don't get that level of attention from US dealers, or that you won't have as much fun with a dealer who works from home. But between Len Wallis and Jeff Knox, I knew that if I ever moved to Australia my high-end audio needs would be met. (And trust me, that subject came up several times!) 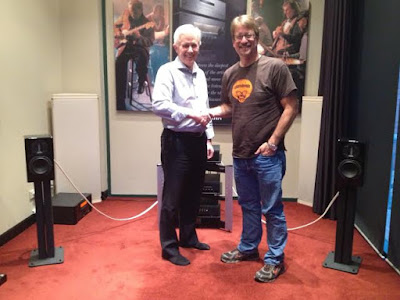 If anything, visiting Len Wallis and Jeff Knox was the realization of a subject I've been writing about all year in my articles for Perfect Sound Forever and Part-Time Audiophile--that a good hi-fi dealer is an audiophile's best friend, even 8000 miles away in a foreign country. Not equipment reviewers. Not other audiophiles on internet discussion forums. A high-end audio dealer, the type that isn't just making a sale but is trying to get you as a customer for life by steering you right. 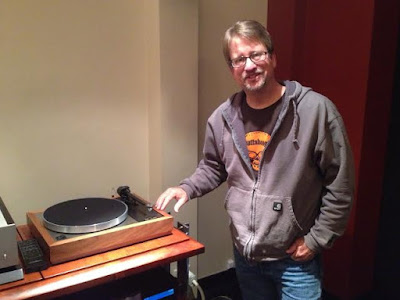 In Len Wallis Audio, I was able to see some of my favorite gear just sitting around. I even saw a Continuum turntable just sitting on a table near the back of the store! I made Brad snap this photo of me with a Linn Sondek LP12 for a couple of nebulous reasons. First of all, I've always wanted to own a Linn ever since I first heard one back when I was in college and they still retailed for $795. These days Linns just aren't as prevalent in the US as they are in the rest of the world. That's too bad because I still find them to be exceptional turntables that offer a unique sound that may not be the last word in accuracy, but it's compelling and musical nonetheless. It reminded me of one of my favorite dealers in the US, Dan Muzquiz of Blackbird Audio, who is one of the last few of the US dealers who can still set-up and extract optimum performance from one of these classics. 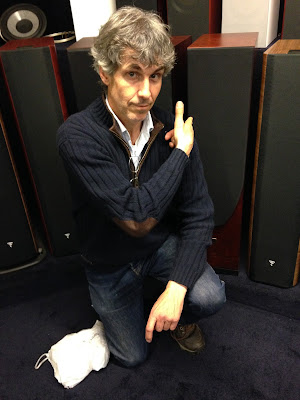 While there, Brad had another treat--Len Wallis still sells loudspeakers from Orpheus Audio, one of Brad's earlier designs. As I glanced around the store and talked to some of the staff, I wondered how often hi-fi stores are visited by the actual manufacturers and designers who make the gear being sold. I'm not talking about planned dealer events, just an impromptu visit to hang out and perhaps talk a little about audio.

Again, I'm not trying to make a general point about the paucity of brick-and-mortar high-end audio stores in the US because I do visit plenty of them. Many of them are just as impressive as Len Wallis Audio. I'm just saying that I long for a return for this type of store in the US. Maybe that's not realistic in 2015, but I still get goosebumps when I see an old-fashioned hi-fi store still thriving in the Age of the Internet.
Posted by . at 8:44 PM