Ronny Whyte is unabashedly old-school. This singer and pianist has one of those big, clear voices like Joe Henderson or even Sinatra. He sounds like Vegas, and not in a bad way. He's seasoned and he knows how to sing a song as if it's an outtake from his autobiography. You know this guy. You've heard him before, even if you've never heard of him before.

I didn't know about Ronny Whyte before I heard his latest CD, Shades of Whyte. But he sounds very familiar in a refreshing way. This collection of standards and originals doesn't break new ground as much as it sweeps the floor and puts on a nice coat of wax. It simply has that smooth, almost perfect delivery that comes from decades of performing in all sorts of jazz venues. 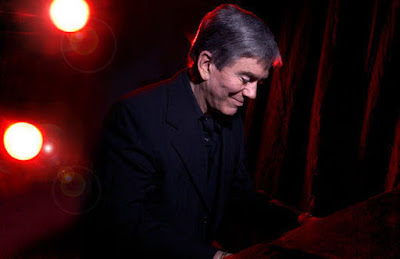 That might not be everybody's thing, and in the last few months I've made it clear that I still love a little innovation in my jazz--the genre means more to me than merely dusting off some old tunes and seeing if you still got it. Whyte obviously still has it--there's a youthfulness in his voice that seems at odds with the man himself. (I'm not knocking him for his age, but some of these performers --Sinatra was one--aren't afraid to show how weary they are and how tough it is to manage these performances at this level.) Whyte still sounds enthusiastic and in love with songs such as Johnny Mercer's "I'm Old Fashioned" and "Dancing in the Dark."

What elevates this particular album is the fantastic musicians that share the stage with Whyte. His piano is smooth and energetic, but the rest of the band--bassist Boots Maleson, guitarist Sean Harksness, drummer Mauricio De Souza, trumpeter Alex Nguyen and Lou Caputo on tenor sax and flute--play fast and lively, so much so that this album speeds by like a gentle breeze. Sound quality is fantastic as well, with exquisite warmth and a tangible sense of camaraderie among the performers. If you're in the right mood and you have the proper cocktail in your hand, Whyte will make perfect sense to you.