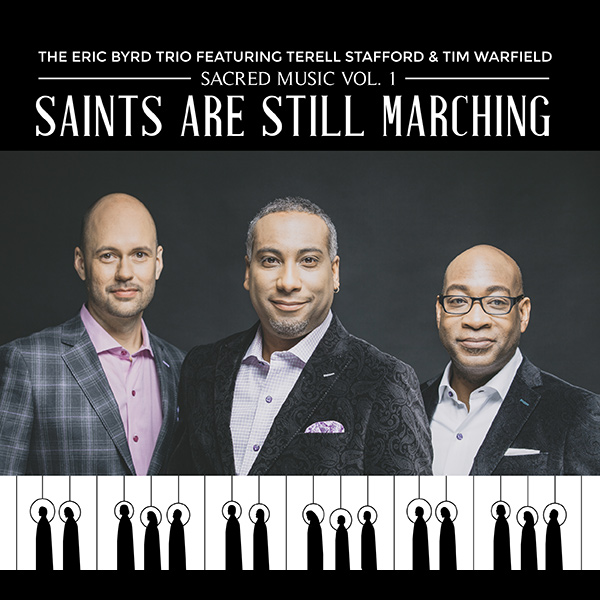 The full title of this release is The Eric Byrd Trio Featuring Terell Stafford and Tim Warfield--Sacred Music Vol. 1: Saints Are Still Marching. I'm mentioning this once because it's clear there's a lot of talent contributing to this release, and everyone deserves credit. Still, the truncated version of the title is easier to remember, and yes, you will want to remember this album.

I didn't think it was going to be my thing at first--spirituals, hymns and gospels played by a straightforward jazz trio augmented by a trumpet player (Stafford) and a sax player (Warfield). It does sound like a good idea on paper, especially if you can maintain a pared-down approach to the music side of it so each track isn't overtly inspirational. The idea should involve culling the beautiful harmonies of standards such as "There's Just Something About That Name (Jesus)," "I Want Jesus to Walk With Me" and "Just a Closer Walk With Thee," and giving it The Jazz Treatment. You know, exploring the themes and allowing each performer to improvise those themes.

Pianist Byrd and the rest of his trio--bassist Bahgwan Khalsa and drummer Alphonso Young Jr.--accomplish this as expected. They're a great, vibrant trio and they've played with many greats such as Wynton Marsalis, Charlie Byrd, Bob Berg and many more. These three gentleman are also known for teaming up with the Brother Ray Band for an 8-piece Ray Charles tribute. The liner notes refer to the trio as having a "rigorous, modern approach to standards," and I agree completely.

Unless you've spent a good chunk of your life singing with the congregation on Sunday morning, you might not recognize many of these songs as spirituals or hymns. That is, you might not know until Eric Byrd starts singing--he doesn't start doing that until the second half of the album. You know what? I don't mind at all. Byrd's voice is so warm and likeable and perfect for singing gospel. He takes a rich, emotional approach to the lyrics without sounding mawkish or overly penitent. It's a voice of pure celebration and love--at times he will remind you of Stevie Wonder.

Byrd even has a sense of humor about it all. In "I Want Jesus to Walk With Me," he adds a piano riff that sounds a lot like "Freddie's Dead." There's probably no specific need to tie these two songs together other than the pure fun of it. That's what makes Saints Are Still Marching so enjoyable, even if you aren't into this type of music--it overflows with love, respect and talent.