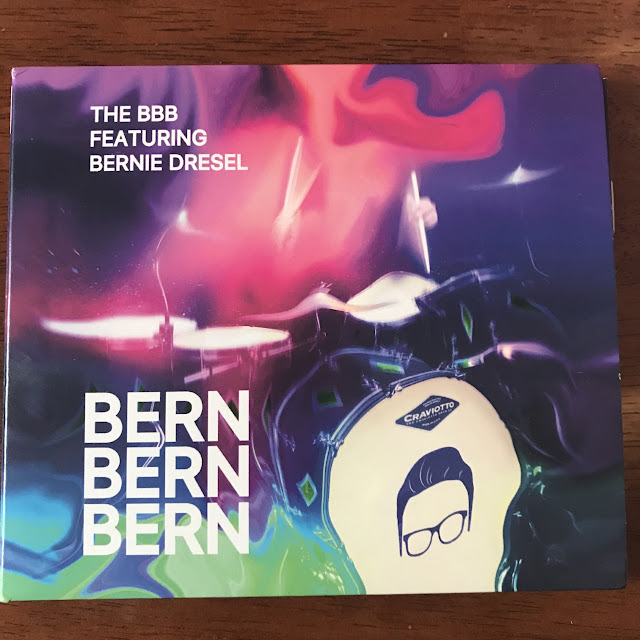 I think I've figured something out about big band jazz: I tend to really like performances that are led by the drummer. I can say the same thing, and often do, about smaller ensembles, but there's something about a drummer leading a big band that just seems so dynamic and exciting. These drummers are leading by their rhythms, so I think they have to be extra expressive in the way they play. If you love drummers like I love drummers, you'll probably have a very favorable reaction to these types of performances.

Bernie Dresel has been doing this for a long time, and he's pretty well-known within the Los Angeles music scene, and not just in jazz. Bernie was the drummer for the Brian Setzer Orchestra for fourteen years, which means I've seen him perform live at least a couple of times. He's been the leader of The BBB, which stands for Bernin' Big Band, for the last couple of years. (That's right, the full title of this album is The Bernin' Big Band Featuring Bernie Dresel's Bern Bern Bern.) Perhaps that's also the reason why I responded so favorably to this album after just a few minutes of listening--Dresel has a classic rock and roll soul that carries over into these 14 tracks. 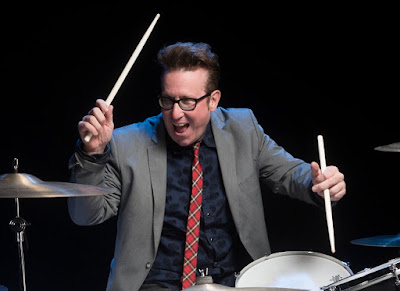 As I just mentioned in my Kenny Carr review yesterday, the intersection between rock and jazz can be very subtle. While Carr's excellent album uses this cross-referencing as a foundation, it's icing on the cake for The BBB. Bern Bern Bern is 95% big band jazz, played with confidence and swagger. That remaining 5% is overt such as the addition of a distorted electric guitar solo from Andrew Synowiec or a very steady rock beat from Dresel. Synowiec even gets to evoke Setzer on a couple of tracks, a homage to Dresel's roots perhaps--it's so satisfying to hear a rockabilly twang in the middle of a big band performance.

It's obvious this album is focused on one thing, and that's Bern. He's a magnificent drummer, fluid and blindingly fast when he needs to be. When I would see the Brian Setzer Orchestra perform, my initial reaction would always be this: "Man, I forget just how great Brian is on guitar." With this album, I feel the same way about Dresel's drumming. It's front and center, and it leads like a whirlwind.
Posted by . at 10:05 AM