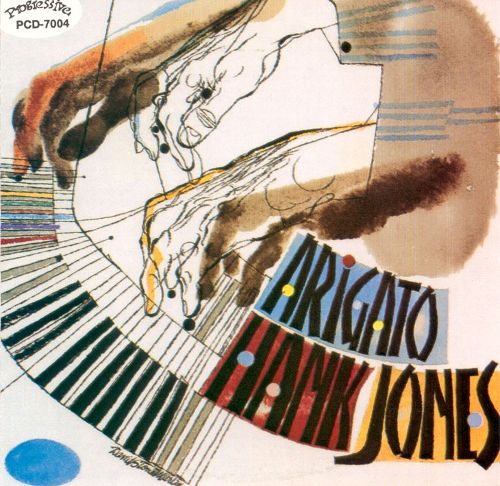 I need to get hoppin' on these new LP reissues from ORG Music--a big box arrived yesterday with a load of new titles from many different genres, everything from classic R&B to hardcore punk to something really bizarre from a guy named Tav Falco. (I mean bizarre in a really nice way, because it's very unique and fun.) In my new role as managing editor of The Occasional, I've been very busy covering trade shows and running to the west coast for events and even receiving and organizing a pile of audio equipment to review, all while my mailbox is still filled almost daily with new music. Last month I made 41 blog entries, a record for The Vinyl Anachronist, but less than half were actual music reviews. I've had Hank Jones' Arigato waiting patiently for far too long, and that's a shame because it's really good.

Hank Jones is one of those jazz pianists who is considered among the greats, but I feel like I rarely hear about him. He's the gentleman who plays piano on Cannonball Adderley's legendary Somethin' Else, and he's also the pianist who accompanied Marilyn Monroe when she sang "Happy Birthday" to JFK. (As a side note, his full name is Henry Jones Jr., which makes me wonder if Steven Spielberg and George Lucas were quietly paying tribute to him.) He's recorded 60 albums as a leader/front man, and I don't own any of them. Younger brothers Thad Jones and Elvin Jones, yes. Hank Jones, no. That's my bad. 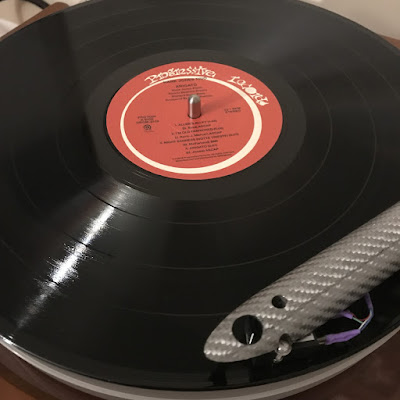 Arigato was recorded and released in 1976 during his second wind of recording in the studio. In the '50s and '60s he was everywhere, playing with everyone, and he found a solid gig as the "staff pianist" for CBS from 1959 to 1975. He experienced a renewal of interest in his work in the '70s due to his involvement in the musical Ain't Misbehavin', and Arigato comes from that period. This is a simple collection of standards, performed by a stellar trio that included bassist Richard Davis and drummer Ronnie Bedford. What you'll notice first about this album is the sheer energy--Jones has a quick, lyrical style that has been described as "impeccable," and his two cohorts are game to turn the key and start the engines. This is a fast jazz album in the sense that it just speeds by, and it leaves you wanting more.

I'm starting to wax rhapsodic about these ORG Music reissues in the same way I gush about 2L Recordings, but for a slightly different reason. ORG is doing a fantastic job of preserving those countless historic windows no matter the view. There are a few great-sounding jazz albums from late '70s--a couple from Chico Freeman come to mind--but there's a thin quality that often seeps in, a digital clarity that suggests the recording engineers were turning their backs on the pure and effective methods used in the '50s and '60s and looking to bring out more detail at the cost of warmth. I noticed this on the ORG reissue of Roland Hanna's Perugia. These ORG reissues from that period shine, however, because they're both faithful to the original recording and yet there's just a tad more warmth and humanity than in the original pressings.

That means Arigato sounds a little light on its feet, but at the same time you get to dig deep into what makes Hank Jones tick. For someone like me, who is being introduced to such a skilled and fascinating pianist, that's a gift.
Posted by . at 8:46 AM