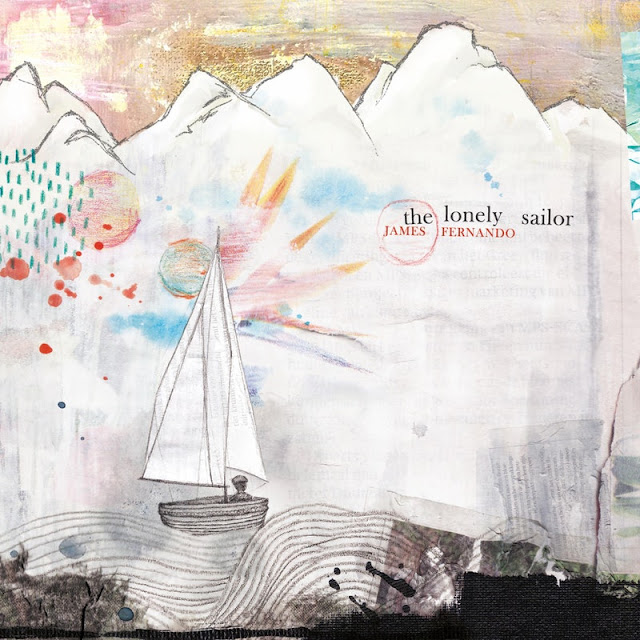 Solo piano works aren't that rare in contemporary jazz, but pianist James Fernando has done something unusual with his debut solo album, The Lonely Sailor. Fernando is classically trained, as you can hear in this ambitious and sweeping work, but he aims to set down these eight instrumentals by "blending classical textures with jazz vocabulary, thus expanding the concept of jazz." Fernando feels that jazz pianists are usually limited to playing "chord changes in the left hand and melodies in the right hand," which limits the ability of the piano to cross into new frontiers of sound.

The result is a solo piano work about a sailor crossing the ocean, with subtle references to Debussy's La Mer in its rising and falling patterns, mixed with occasional melodic flourishes that conjure up a bit of Gershwin. Fernando takes this a step further by using an "electronically augmented piano," which means that the beautiful sound of his Steinway piano occasionally veers into more modern, synthesized textures. He achieves this by using contact microphones placed on the piano, and running it through computer software that he controls through a separate foot pedal. Sometimes it sounds as if Fernando is running everything through a Leslie speaker, which should be a familiar sound to most, but occasionally the distortion gets ramped up and takes on a life of its own. There are points where this becomes nightmarish and coincides, of course, with trouble on the open sea.

While this qualifies as an experimental piece, it wouldn't succeed as much without the beautiful, haunting melodies that emerge from the acoustic side of the recording. The idea of sailing across the ocean--"looking into unknown territory, looking for a better place"--is quite vivid, and it won't be difficult to imagine the waves, the weather and even the horizon. You can easily tell how those influences enter into each piece through the interface between old-fashioned melody and the completely novel way of mixing the acoustic and electronic halves of the compositions.

That makes The Lonely Sailor an unusually intriguing work, one that can appeal to both traditional ideas about beauty and a yearning to slip past the boundaries of both jazz and classical composition into a new realm of sound. The quality of that sound is equally beautiful and challenging--it's fascinating to hear the interaction of the piano, the way it excites the boundaries of the studio, and the nearly alien sound of the notes running through the software. I do love the sound of a prepared piano--one of the reasons why I'm so mesmerized by Arvo Part, for example--but Fernando has found a new way to do that, one that opens a multitude of doors for other composers.
Posted by . at 9:36 AM