Another beautiful 'table from Funk Firm 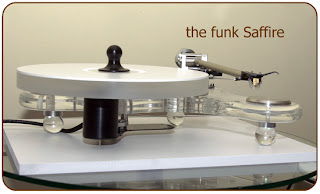 This Funk Firm 'table is their Saffire model, which costs roughly two-and-a-half times as much as the Vector. Designed as a replacement for the original Pink Triangle Anniversary turntable (one of the best ever made, in my opinion), the Saffire is machined from a solid block of acrylic and has been optimized to control vibrations and resonance. It uses a very sophisticated DC drive system that is an improved version of the one originally used for the Anniversary. Funk Firm describes this three-pulley system as a blur "between the boundary between direct drive and belt drive."

Here's a beautiful pic of the Saffire with a Linn tonearm: 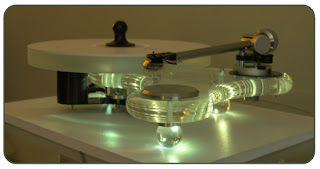 And here's a pic of the original Pink Triangle Anniversary so you can see how far this design has come in the last couple of decades: