I finally ordered a pair of speaker stands for my new Trenner & Friedl ART monitors. Based on a recommendation from Dan Muzquiz of Blackbird Audio/Gallery, I've chosen the Quadraspire QV60s. I seriously considered more conventional stands from Target, Skylan and Sound Anchors, but my ARTs are so beautiful and stylish that I thought they deserved something a little more flashy. 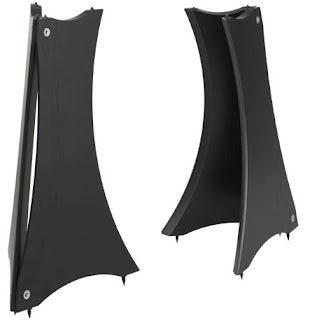 Quadraspire is located in the UK, and I've known about their equipment stands for some time. They're highly regarded in the audio world, and I like the fact that their products are mostly thin, streamlined and curvy. The QV60s resemble nothing if not a pair of butterfly wings. Dan sent me a pic of his ARTs on the QV60s: 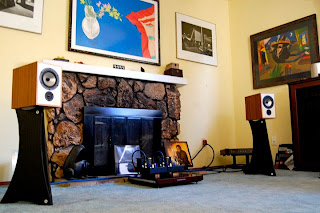 I'm looking forward to getting them. But instead of shipping them to me from San Diego, Dan suggested I take a trip up to Dallas to visit the guys at The Sound Organisation, the US distributor for Quadraspire. They are also the distributors for European brands such as Dali, the Chord Company, Isotek, Primare and Rega. So I'm making plans to drive up sometime next week, pick up my stands and then get a tour of the facilities. Of course I'll be taking lots of pics and posting them right here. I'll also post my initial impressions of the QV60s and how they affect the sound of the ARTs.
Posted by . at 3:06 PM