A Flock of Seagulls with the Prague Philharmonic Orchestra--Ascension 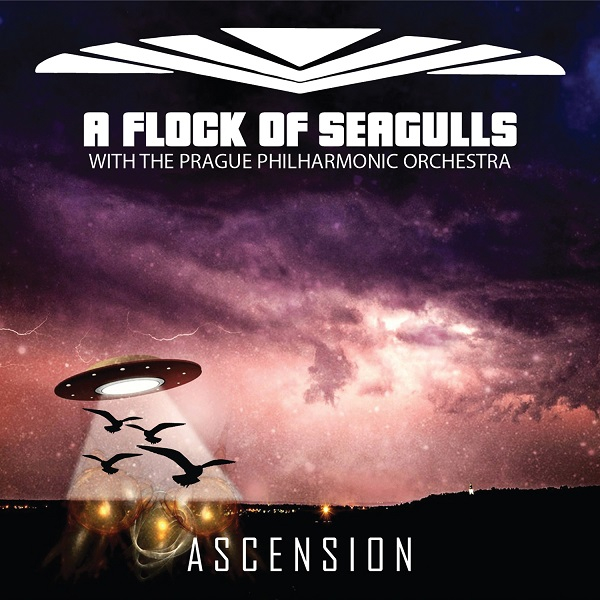 I once had a girlfriend who told me that her favorite band of all time was A Flock of Seagulls. It's not that I had anything against the band, they were always "fine" with me--unlike the '80s synth pop bands that really aggravated me like Depeche Mode, Erasure and maybe The Cure. (I kind of like The Cure now.) But I did think it was odd that of all the bands across time and space, this one was her ABSOLUTE NUMBER ONE. Then she explained why in a long, convoluted tale about getting backstage during one of their concerts, meeting with the band, partying with them afterward and making out with one of them in the limousine. I thought oh, okay, they can be your favorite band of all time.

I haven't thought about the band very much in the last twenty years or so, aside from an occasional hairstyle reference or that sad '80s party scene in La La Land. So when I was approached about getting this reunion album in for review, I didn't jump at the chance. But here it is, playing in my system, and it's actually pretty good. The original quartet of Mike Score, brother Ali Score, Frank Maudsley and Paul Reynolds have released their first album since 1984, and while it's pretty much a straightforward performance of their biggest hits and a handful of deep tracks--backed by a large orchestra, of course--it's a remarkable blast from the past. That's because each song falls into one of the following fun categories:

1) One of the big, obvious hits
2) Oh wow, I haven't heard this song in forever
3) I know this song, but I didn't know it was an FOS song!
4) I never heard this one before. Is it new? I never really bought their albums.

Joking aside, Ascension is fun because it will remind you so succinctly that FOS indeed had a sound, one that was unique. They mastered that sweeping wave of synthesized romanticism, and while their melodies were basic, they were also memorable. The ringing guitars are still there as is the steady electronic drumming, and while it's clear the vocals are familiar they have a slightly aged sound that's the biggest departure from the band in its prime. The Prague Philharmonic Orchestra might have been little more than a novelty--I've heard plenty of forgettable tribute albums of modern pop/rock adapted to a big orchestra--but in this case the big string sections add to that trademark sweep, the grand and lush melodies that move so slowly within the otherwise lively beats.

If you are a big fan of FOS, like that old girlfriend, there's good news. A Flock of Seagulls will be touring in 2018 to support Ascension. They've actually been touring together for a while now. Mike kept performing with session musicians over the years, and they did reform in 2003 and 2004. While the original four have been performing here and there ever since, this is the first time they have been captured on record in 34 years. For the most part, they sound just as good as ever.
Posted by . at 11:57 AM