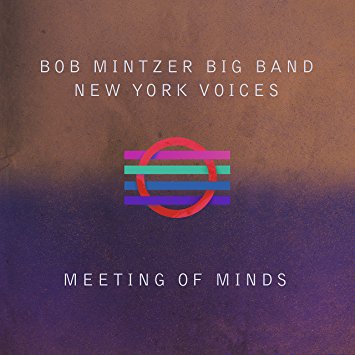 Almost by definition, big band jazz should evoke a strong sense of nostalgia. Meeting of Minds, the new album from the Bob Mintzer Big Band and the New York Voices, doubles down on that sense of long ago by teaming a brash and tight big band sound with an equally versatile complement of singers. Using standards primarily from the Great American Songbook during the '30s and '40s, this sprawling album recreates the sound of a huge celebration in the heart of New York City during wartime. My first impression was that of a huge USO show, with all the big names coming out to wish the boys well before they were shipped out to the front. That's the essence of nostalgia, a very specific time and place.

In a way, this is genius. As I've said just recently, the trick to enjoying big band jazz is finding the novel theme or idea that propels the performances into something memorable. That's not always easy. If Meeting of Minds had not combined the two groups, the result would have been something professional and polished, but not especially distinctive. The magic resides in the partnership of Bob Mintzer and the Voices' Darmon Meader, two composers who take their own strengths and blend them into something complex where fascinating ideas thrive. Those ideas come in the form of thrilling solos, more than a dozen of them, a rarity when so many musicians are simultaneously involved and trying to keep everything seamless and taut. 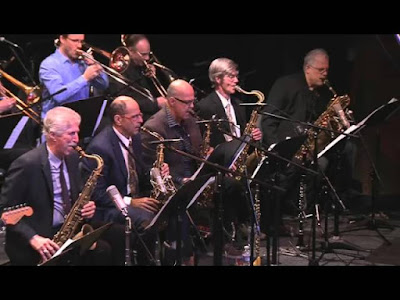 Mintzer and Meader, along with 19 other performers, take an unusual approach to the musical union. Rather than simply blending equal measures of big band jazz and four-part harmonies, these arrangements weave in and out of the dual genres and create an evolving structure that doesn't always adhere to the nostalgic feel. It's almost like the streets of New York City, where you can turn a corner and find yourself in a radically different neighborhood. There are moments, fleeting of course, where the USO show folds up and suddenly you're hearing Brazilian jazz influences, or even funky sojourns that take you to more recent eras. It's surprising how much of this is instigated by the New York Voices--they can summon up the spirits of the Andrew Sisters, or they can drop the affectations and suddenly sound like they're singing contemporary pop. Because these deviations are so sly, it doesn't take you out of the moment. It's more of a roller coaster ride because the fun quotient remains constant.

Overall, Meeting of Minds sounds enormous in its scope. This is a big big band, and the complex vocal arrangements appear to double the size of the stage. There's a lot going on, obviously, but the sound never becomes muddled due to the exceptionally clean production values. Back in the '30s and '40s, they had words for shows like this, words like extravaganza. There's a wonderful New-Year's-Eve-in-Times-Square vibe to this album, and if you can forget that it's only June, you'll have a ball.