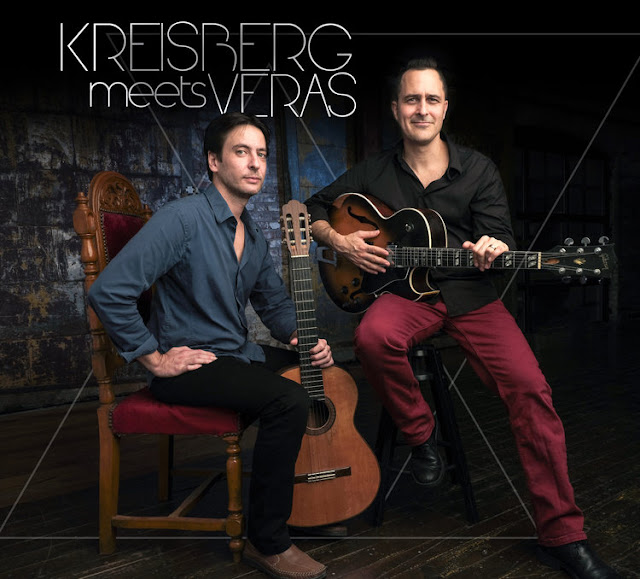 Listening to guitar duos is so soothing and relaxing. For some strange reason, this is even more so when one of the guitars is electric and the other is acoustic. This applies specifically to the jazz style, of course, where the traditional electric guitar sound is smooth and mellow and generally unadorned with effects. It's already a soft sound, in other words, and adding an acoustic guitar to the stage softens that sound even more. You can really focus and concentrate on the differences between the two instruments--not just amplified versus non-amplified, but steel strings versus nylon. I have quite a few of these recordings in my collection, and they're the perfect representation of a late night album.

Kreisberg Meets Veras is a beautiful yet slightly adventurous entry in the jazz sub-genre. The dynamics are low-key and controlled throughout these eight tracks--a combination of originals and classics from Monk, Nascimento, Mingus, Shorter and Corea--so it's the perfect soundtrack for drifting away into the night. (Yes, I was prompted into a mid-day nap the first time I put this in the CD player.) On the other hand, close attention reveals that these two skilled guitarists are doing so much more than playing pretty music. Moments of subtle dissonance abound, and there's an edge to this gorgeous flow of sound that will capture your attention and keep you engaged. 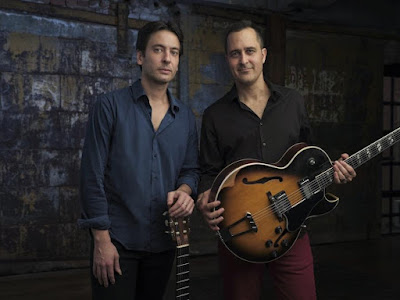 Jonathan Kreisberg, who also produced, plays his electric guitar with a gentle speed--his sound is effortless even when his fingers are a blur. This silky tone is part of what makes this music simultaneously relaxing and challenging, and that's because he's adept at expressing so many different emotions without altering his trademark style. Nelson Veras, you can deduce, plays the nylon-stringed acoustic guitar. You'll immediately identify that as equally smooth, and yet much of the flavor of this music comes from him, the Spanish and Middle Eastern touches, the playfulness. It's almost as if Veras is the singer, and Kreisberg is the rest of the band. One lays down the mood while the other puts images in your mind.

Sound quality has to be spectacular in a quiet recording such as this, and it is. You want to hear each of the two guitars existing in their own space, but you want to hear a physical interaction between the two especially since both are playing hollow-bodied instruments. You want to hear the wood resonate in the air and against the torsos of the musicians. It's important for those cues to exist, the sound of humans making music with instruments, fingers on fretboards, the occasional sigh or slight shift in space. That's what delivers the illusion of having these two gifted gentlemen in your home, and this recording is wonderfully convincing in that respect.
Posted by . at 10:59 AM