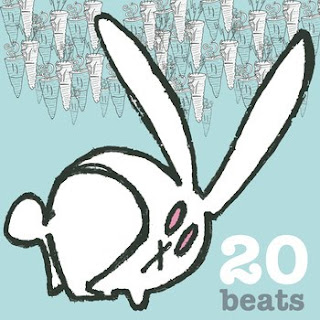 "20 beats is up for streaming and buying at http://www.boyeatsdrummachine.bandcamp.com/ (!)

100% of sales from bandcamp go directly to the artist. I ♥ bandcamp. it will also be up on I-tunes on Sept 20th.

This is a digital only release. no CDs will be harmed in the making of this album.:)

20 beats is an all-instrumental collection of 20 songs and features 10 of Portland's BEST drummers along with samples from vintage vinyl, groovy guitars, and electro-pop goodness. The album even comes with 20 album covers--a different one for each song.

Thanks so much for the support! Jon."


If you've ever heard Jon's albums Booomboxxx and Hoop + Wire, you'll know what a gift he has for mating powerful beats (courtesy of Portland's outstanding Bridgetown Breaks) and unusual samples to his own live performances. You can download 20 Beats--all 20 of 'em, for just $7.49. Plus, each song has its own bunny-themed cover, so if you think the one above is cool (and I really do), then imagine how cool it is to have 20! It's an absolute bargain!
Posted by . at 12:00 PM