Another visit with Dean Peer... 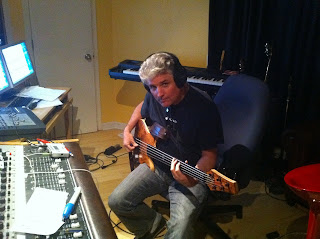 For the holidays, Colleen and I visited bass virtuoso Dean Peer at his home north of Austin. This was the first time I've seen Dean's home, which houses the studio in which he recorded last year's stunning album, Airborne. While the studio is tucked away in a corner of his house, it's still quite a sophisticated facility with sand-filled walls, a floating floor (also filled with sand) and plenty of room treatment. Dean uses a combination of a classic mixing board and digital software to achieve his innovative sounds on the bass guitar; he laments that the former will soon be obsolete, but he is determined to mix at least one more project on it.

A few weeks ago, I heard through the grapevine that Dean was working on some new material, and that a new album is probably in the works. Considering that Dean has recorded two albums in about twenty years, this is good news. Dean sat down with me and played a couple of the new songs, and they were quite different from what we've heard on Airborne and Ucross. What I heard was dark, moody and slightly sinister, but with a strong emotional undercurrent. For everyone who was surprised by the difference between his first two albums, you'll be even more surprised by the third.

At one point, Dean handed me a LP copy of the Dixie Dregs' Night of the Living Dregs from 1979 and asked me if I was familiar with it. He told me to take it home and listen to it and tell him what I thought. It turns out that Dean is planning to work with Dixie Dreg's bassist, Andy West, on the new project. It's been a few years since Andy played with the Dregs (he's a big-time software expert now), but it will be interesting to pair Dean's elaborate bass harmonics with Andy's more solid and fundamental sound. 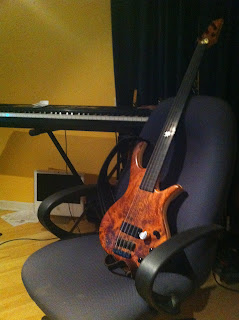 Here are a few more pics from the visit. This is one of Dean's basses, the one featured on the cover of Airborne. You'll notice the "dp" on the fret; that's for Dean Peer, since this was made especially for him. 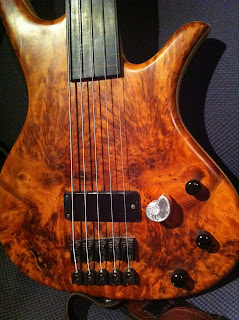 Notice the knob? Yep, that's a Cardas nautilus shell knob. Dean's association with Cardas Audio goes way back--they currently sponsor his shows, and he uses their cables throughout his gear. 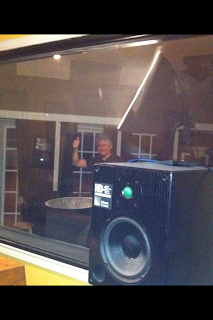 These Meyer Sound studio monitors were interesting to listen to. As Dean said, "They're not much fun to listen to because they're so FLAT, but they're incredibly accurate." As I listened to him playing his bass through the mixing board and the Meyers, I was struck by the pinpoint imaging. It was strange to see Dean play a few feet to my right, and then have the sound from the strings placed so firmly between the speakers to my left. I certainly didn't think they were unpleasant to listen to, but they were very far from warm and romantic. 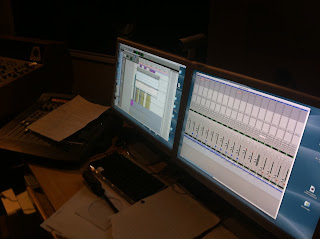 Here's the more modern side to Dean's recording studio... 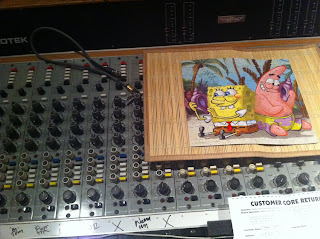 ...coupled with the more traditional side. As you can tell, Dean has kids. 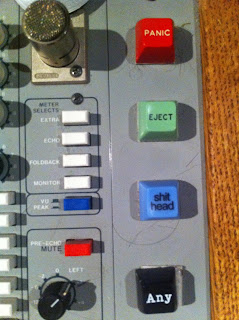 And a healthy sense of humor. 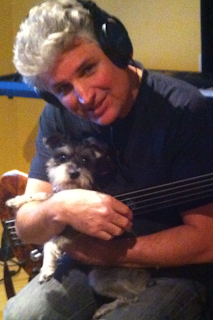 And now my dog Lucy is famous, too. She was extremely curious yet well-behaved around so much expensive gear. Then again, she's used to it at home.

I'll keep you informed about the new album. I'm really looking forward to it!
Posted by . at 2:59 PM