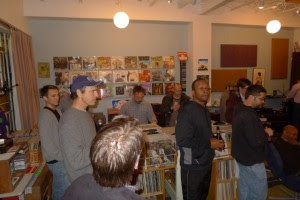 It's kind of amazing when an idea pops into your head, you plan for it and you execute it--and it's a success. Our idea for a music event in Austin came from humble beginnings. I've been in Texas for more than two years, Colleen Cardas has been here in Austin since early March, Bob and Stacy Clarke of Profundo moved to Round Rock a couple of months ago and Brian Di Frank of Whetstone has been here the whole time. We've joked about building an Austin Hi-fi Empire ever since we all got together, and I think we set a proper foundation last night by hosting our very first Hootenanny at Whetstone Audio. 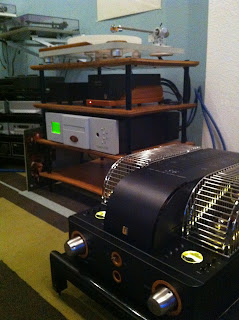 The idea was simple. The Clarkes represent such stellar brands as Trenner & Friedl, Heed, Transfiguration and VivA, and Colleen and I represent Unison Research and Opera Loudspeakers. What if we each assembled a system in Whetstone Audio and invited everyone in Central Texas to come to Austin, drink some beer, eat some pizza and listen to our best efforts? Although Colleen Cardas Imports and Profundo are technically "competitors" for your high-end audio dollar, we're all good friends and know that there's always room in the marketplace for high-quality music reproduction. 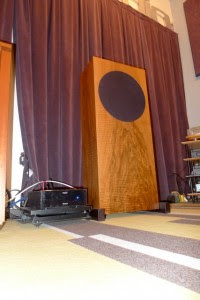 We only had one problem: how many people would show? Although there are a handful of high-end dealers in Austin, this is a music town, and the old audiophile adage that musicians tend to have shitty audio systems (mostly because they're spoiled by the real thing, and partially because many musicians tend to be po') may influence the number of people who would be interested in such an event. 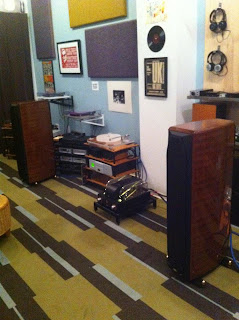 After we all set up our systems and fine tuned them in Whetstone Audio's big yet crowded sales floor (Brian has a ton of great gear on display), we waited for 6pm to arrive with a modicum of nervousness. Brian ordered two Gigantor pizzas and plenty of beer supplied by Jester King Brewery, and the Clarkes brought some amazing wine from their extensive cellar, and we all wondered how much food and drink we would have to take home at the end of the night. 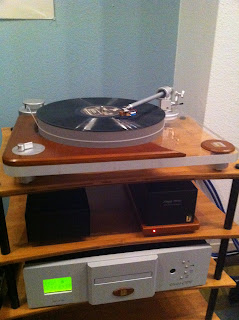 When 6pm arrived, cars started pulling up--much to my surprise. By 7pm, the place was packed. Suddenly, Bob and I were coerced into a stereo war, where he would play one track and I would play one track. Our systems were very different (his was solid state with a lot of power and dynamics, ours was tube-based and airy and delicate), but the crowd was equally thrilled by both types of sound. I will say one thing in the spirit of self-promotion: chicks dig our Giro turntable. There were a handful of women at the event, and every single one of them loved its looks. One even turned to her significant other and said, "We need to get one." Talk about WAF (Wife Acceptance factor). 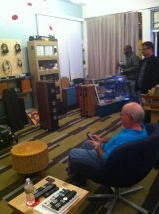 By the end of the night we were all tired, yet excited and happy. We're even leaving the system at Whetstone for the next week or so because we were too tired to break it all down. (So if you want to come by and check it out, feel free!) We are planning future events at Whetstone, especially since Unison and Opera are introducing so many new products in the coming months--including a music server and a DAC. The Clarkes also want to keep coming to Whetstone. By the way, Brian will be hosting an event next month with Sean Casey of Zu, so check out Whetstone Audio for more details. 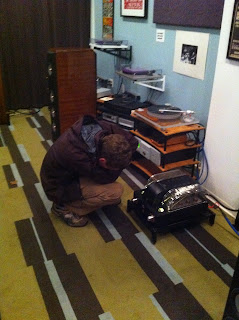