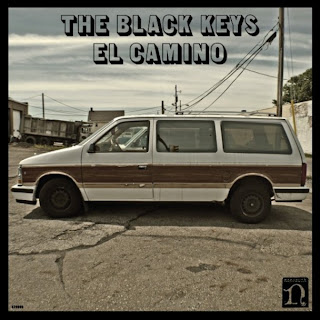 It was the middle of December, and I was just sitting down and composing my yearly Top 15 list for Perfect Sound Forever. I was trying to decide between Wilco's The Whole Love and Fleet Foxes' Helplessness Blues. Wilco was edging out, mostly because I'm starting to wonder how I feel about the Foxes' musical output as a whole. What was timeless on their debut album was slowly becoming just "novel" after two albums, and I worry that if they don't start evolving by the arrival of their third album, the antiquated phrasing of their folksy lyrics is really going to start getting on my nerves. But just as I was about to slip Tweedy & Co. into the top slot, The Black Keys burst on the end-of-the-year scene with El Camino. It's a game changer, to say the least.

I don't have to remind you of the innate and sublime coolness of the Keys. But here's an excellent example: the album is called El Camino, but the cover photo is of an old Chrysler Town & Country. I heard someone else ask, "Why is it called El Camino then? What's with the mini-van?" That's absolutely right, and that's why they're so friggin' cool. Put an El Camino on the cover and you think oh, they must like El Caminos. Okay. But put an old mini-van on the cover and you think "Why?" Yep. The Black Keys are already in your head. Cool, cool, absofrigginutely cool.

If it hadn't been for the exquisitely ambitious The ArchAndroid last year, the Black Keys' Brothers would have easily been my favorite album of 2010. I spent most of the summer of '10 with one or the other playing in my car CD player--and I spent a lot of last year behind the wheel. Brothers was so surprising in its stripped-down simplicity (it's just a guitar/singer and a drummer, much like the White Stripes) that it was hard to define what made the album so great. The lyrics were straightforward and based squarely in the blues-rock tradition without being encumbered with poetry, finesse and profundity. The songs were about love, sex and bad relationships--usually all three at once. El Camino doesn't expand upon that basic formula, but it does refine it somewhat.

This sounds like a bad thing, but El Camino is Brothers, only polished up and perfected. That doesn't mean the boys have sold out; they've just taken things up a notch. They know what they do well, and now they're more focused and confident about it. The songs on Brothers, while rooted in rock traditions, had such a warped and skewed feel to the production that it made the songs sound like lost '70s rock classics that existed in a spaced-out parallel universe. The songs on El Camino, by comparison, are from this planet. Listening to this album, you'll have that same sense that every single song (there isn't one iota of filler here--every song is equally strong) should have been a hit in 1967, or 1971...or 2011. The songs might not have survived a year like 1986, when the sheer testosterone in pop and rock music had been neutralized in most quarters, but all the cool people would have rediscovered the Keys once the '90s came around. The Black Keys reconstitute the greatness of classic rock, blues, soul, glam and even disco in the same gifted way as modern performers such as Sharon King and the Dap-Tones, or Raphael Saadiq.

If you're wondering if El Camino has a hit that's the equal of last year's "Tighten Up," that's a big affirmative. In fact, every song on the album hits that high. I especially like the opener, "Lonely Boy," which has one of the most catchy choruses I've heard in years: "Oh, oh-oh...I've got a love that keeps me waiting/I'm a lonely boy." Yeah, I know, I have a woman like that in my past as well. She drove me crazy. What a cool, cool song it is. It's in my head, and I can't get it out.

While Brothers was certainly a breakthrough for the duo, the flawlessness of this album results in the kind of glow that suggests universal appeal. Everyone I know who has heard this album is captivated by it almost immediately. I could use a lot of cliches to describe the Album of the Year--"firing on all cylinders"--comes to mind first. Expect El Camino to invade the collective unconscious of serious music lovers in a big way over the coming months.

Oh, and I'll take the time to dissolve the mystery of the album cover--the van in question was the band's touring vehicle in their early days, and they later sold it by jokingly advertising it as an El Camino. Evidently someone thought it was too cool to pass up. You'll feel the same way about the album.

(BTW, I got the LP because it includes the whole CD as well. I love this marketing trend with all my heart, because I can list to the Keys in my car and my home at the same time!) 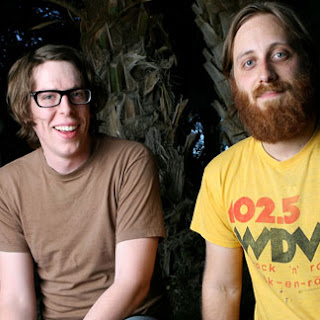