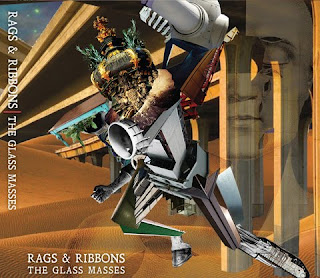 Over the last few years I've been deliberate and thorough in my search for new music, resisting that "filling-in-holes-in-my-collection" mentality that comes from getting on in years and becoming locked in the rather misguided view that when it comes to rock, there's absolutely nothing new under the sun. Certainly my first instinct on a first listen to an unknown performer is to find the specific musical genre that fits, mostly so I can introduce a "RIYL" to my reasders, but I'm so tired of that type of thinking. In the last year or so I've noticed that the truly great new performers aren't reinventing the wheel of rock and roll, but devising an alchemy where familiar sounds are combined in a way that's absolutely novel. Think about Fleet Foxes or, even better, the Black Keys.

These thoughts sprinted through my mind about ten minutes into Rags & Ribbon's new CD, The Glass Masses. I couldn't quite resist playing a quick round of "Who does this remind me of?" when I heard this ambitious, theatrical and downright fun album, and I came up with Muse first, and maybe Queen second. The decidedly melodramatic vocals, delivered mostly in harmonies between keyboardist Jonathan Hicks and guitarist Ben Weyerhauser, have that same sort of sad Russian-esque folk strains of the latter while maintaining a fluid litany of Classical-strength piano runs as Freddie Mercury at his most deranged. (Drummer Chris Neff fleshes out the expansive sound of this far-reaching trio.) Yet this exciting sound is evocative of a time than derivative of a style, and it's probably been at least a couple of decades since you heard this all before. In other words, it's a cop-out to call these complex yet accessible songs anything but original.

Where Rags & Ribbons diverges from neo-glam is their earnestness, which in lesser hands can be a curse more than a strength in 2011 (see Coldplay's last three albums, which were truly awful). The vocals in the opening track, "Even Matter," do evoke Chris Martin's repertoire with their unsubtle emotional pleas despite the fact that the music is incredibly layered and ornate and therefore much more compelling. That feeling of hyper-sensitivity and forced poetry will pass once you realize that the second song, "Liar," reveals the boys can rock and weave intricate musical ideas at the same time, much like Muse and Queen. You might even feel a genuine wave of nostalgia when you hear a bit of Big Country in Weyerhauser's guitar yelps in "Abacus Kids," one of the stand-out tracks of the album. By that time you're just being silly, and you just need to drop the comparisons so you can sit back and enjoy this album.

With a few more albums, that earnestness might be replaced with a bit more confidence that might even be viewed as sexy--something Mercury and Matthew Bellamy had (and have) down pat. Despite that minor misgiving, Rags and Ribbons have a real ace up their sleeve, and that's sheer musical talent. It's rare to see young musicians have such mastery of both their instruments and their instincts this early in the game. I can't guess whether this trio will become huge in the coming months, but I won't be surprised if they do. The Glass Masses is an impressive debut, both unexpected and exhilarating in its success at just being different...in a very old-fashioned way. 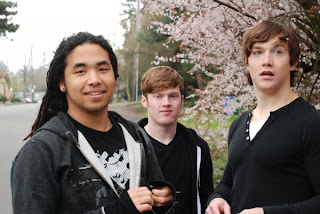 Email ThisBlogThis!Share to TwitterShare to FacebookShare to Pinterest
Labels: rags and ribbons the glass masses, the vinyl anachronist