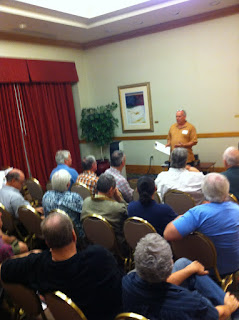 That's how Colleen and I were described by the members of the Arizona Audio Video Club after we were the invited guests at their November meeting on the 28th. Both of us thought, "Wow...we've never been called that before." But we'll take it. We've also never attended an event like this before, but I have to admit it was a lot of fun--even though we didn't know what we were going to talk about once we were standing in front of the packed conference room at the Phoenix Airport Marriott. We decided that Colleen would talk about CCI--who we were, how we got started, and what lines we carried--and I would describe the system we brought and play some music. I was warned that there were many engineers in the club so I knew I'd have to be ready to explain all of the technical aspects of the gear we brought. I did a lot of homework. 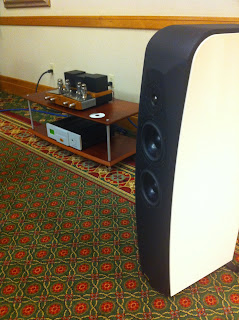 We kept the system as simple as possible because we knew we'd only have a couple of hours to set-up the system and make it sing in the rather large room. One person seemed surprised that we didn't bring a turntable since I'm a "vinyl guy," but that would have been too much to assemble. Instead, we brought the Unison Research Sinfonia integrated amplifier (27 wpc, single-ended parallel ultralinear pure Class A amplification that uses 6550 valves in the output stage, $6495), the Unison Research CDE CD player ($3895 plus $225 for the optional optical DAC) and the new Secondas from Opera Loudspeakers ($3995 per pair)--finished in a beautiful gloss white. We also had a pair of the new little Opera Mezzas ($1495 per pair) on hand. Both pairs of speakers were the first in the US, so it was a real treat for the members. 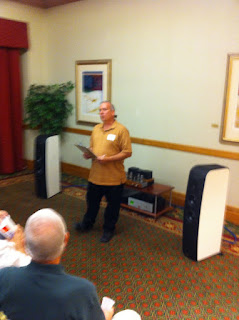 I then played three cuts for the members: "Midnight Sugar" by the Tsuyashi Yamamoto Trio from The TBM Sounds! sampler, "A Whiter Shade of Pale" from Halie Loren's They Oughta Write a Song... and "1 Speed" from Dean Peer's Airborne. The system sounded surprisingly good in such a big room; it's amazing how a group of warm bodies can tame the resonances in a big open space. Then Steve Wooten (pictured here) took over and allowed members to play their music. Bill Coombs of The Sweet Spot, our dealer in Phoenix who helped to put together the event, commented and how quiet and attentive the members were during the demo...much more than usual. Afterward we received several emails from members telling us how nice the system sounded. 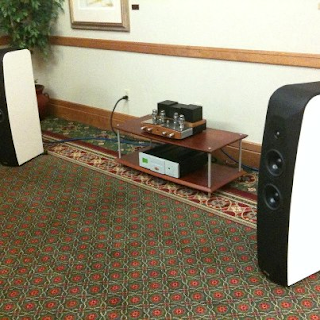 Colleen and I would like to thank Bill, Steve (who treated us to a great dinner beforehand) and the members for a wonderful event. Special thanks go to another member, also named Bill, who brought a pumpkin pie cake that was the real hit of the evening. Almost every email we read said, "Great sounding system...and that cake!"
Posted by . at 1:26 PM