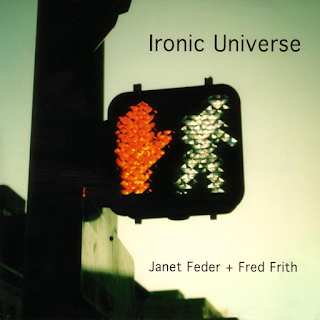 I've been a big fan of Janet Feder's since she walked into our room at the California Audio Show in August and asked us to play her superb new LP, Songs with Words. (You can read more about that album here.) In fact, I just turned in my list for the Top 20 Albums of 2012 to Jason Gross of Perfect Sound Forever and Janet's album was near the top. There's something about the sound of prepared instruments such as pianos and guitars that takes me somewhere both alien and comforting, and I could spend hours listening to the unique and haunting sounds she extracts from her acoustic guitar.

As it turns out, Songs with Words is not Janet's first album. She's been recording and releasing albums for many years, albeit at a very slow pace (roughly one every six years, judging from her discography). Working backwards from 2012, the next addition to my Janet Feder collection is 2006's Ironic Universe, which she recorded with avant-garde guitar legend Fred Frith. Mr. Frith appears on roughly half of the twelve tracks here, and he's the perfect complement to her lyrical yet deliberate--and sometimes folk-oriented--playing. On these duets, all live studio recordings without effects or overdubs, Frith shows off his fascination with the various genres of Americana by picking with the appropriate amounts of lonesoneness and soul, something that emerges as an illuminating contrast to Janet. The album's closer, "Closing," is a trembling whirlwind of decay and echo, a musically precise version of random metallic objects being blown about a junkyard during a hurricane. It builds to a swirling, crashing crescendo before it slowly fades over the horizon. 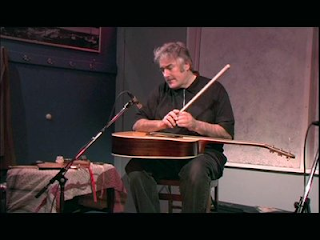 Frith is noted for dropping objects such as ball bearings and other found objects onto the strings of his guitar, usually as it lays flat on his lap. This is an interesting counterpoint to Janet, who places key ring curlicues onto the strings of her guitar to achieve a distinctly plucked metallic sound. On the songs without Frith, Janet explores similar landscapes as she would in the future for Songs with Words, but with a more fluid, intricate style. On the later album, she is more willing to explore the empty spaces between her ideas, something that comes with experience and confidence. On Ironic Universe, she is swifter and more willing to wow the listener with her talent. It almost makes more sense to start with Ironic Universe and then move on to Songs with Words so you can see the arc of her artistic expression. 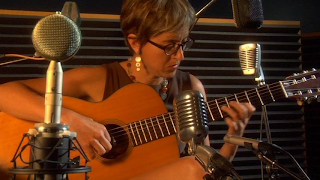 The only downside to Ironic Universe is that I would love to own this on LP. I downloaded it from her bandcamp site (http://janetfeder.bandcamp.com/yum) in a FLAC file, which sounded fantastic, but I really love the sense of space and air on my beautiful LP pressing of Songs. At the same time, I continue to be amazed at just how good hi-rez downloads can sound, and how much they can engage my interest. In other words, this is an incredible marriage between an artist pushing the boundaries of a musical instrument, and a commitment to celebrate that instrument with stunning clarity and realism. Highly recommended.

(By the way, several YouTube videos can be found of Janet Feder and Fred Frith performing these tunes. Originally Ironic Universe was released as a CD/DVD combo package.)