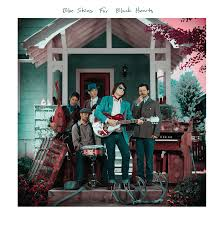 "Keep On Keeping On." Doesn't that sound like something you'd say on a cloudy afternoon--maybe back in 1974 or 1975? It's an optimistic notion--we're kind of screwed right now but the sun's gonna come out by the weekend. That's how I, in retrospect, look at my life in Portland. I lived just outside of that wonderful city for a couple of turbulent years and I loved the way people dressed in the brightest of colors when the weather was the wettest and the grayest, which was basically most of the time. I loved all the whimsical touches everywhere--the sex-crazed donuts and the big neon reindeer on the bridge and the flip-flop/parka look. That's when you sort of notice that Portland is a city of paradoxes, or it least it strives to be. It's that ironic duality, and it's the thing.

Blue Skies for Black Hearts is a Portland-based band, and with that name, it must be. "Keep on Keeping On" is the opening cut on their new eponymous album, and it's a naive pop song on the surface but wears a scowl when no one's looking. The CD, coming out in mid-July, has that sunny afternoon power pop wistfulness that's trying to evoke Big Star, or at least Teenage Fan Club, but when this quintet loosens up and forgets themselves, they might even sound like the Monkees led by an older, wiser Buddy Holly. (Charismatic front man Pat Kearns even wears the big black glasses to cross that T.) That's the relaxed, pure pop vibe these guys want to project--let's have some, at least until the rain clouds roll in and everything gets serious, or at least way semi-earnest.

If this album, the band's sixth, seems centered around Kearns, that's because it is. Kearns is noted for rotating musicians in and out of BSFBH, with the focus on clever songwriting. In this respect you can hear the Big Star influences in the lyrics--it's simple basic pop thoughts but told with a sincerity that elevates the song. Unfortunately that focus is also applied to the lo-fi sound approach--this album stretches the idea of late '60s pop into a rough, almost minimalist production that might sound its best on a small radio on the beach. The audiophile in me wants more, but I might also be missing the point. I like this album so much I want it to sound more alive, that's all.

In Portland, this band is definitely a local favorite. One game the Portland fans like to play, it seems, is comparing BSFBH to a wide variety of musical legends--the more over the top, the better. I've mentioned the Monkees, Buddy Holly and Big Star, but I've seen other critics mention everyone from John Lennon to Brian Wilson. If Portland is anything, it's wry. It's also pessimistic and sardonic, yet upbeat and amused. That's the paradox again, and this band is the soundtrack for that realization.
Posted by . at 10:48 PM