The Illness' Mirage on CD 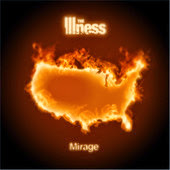 "Hey everybody. After six years my beloved rock'n'rollers and I are taking an indefinite leave from the band."

I received this group email from Josh Viers of for The Illness about two weeks after he sent me his band's latest release, the 5-song EP Mirage. John and I had been trading emails for a few weeks--he once again wanted to thank me for the positive review on their last album, A Monument to Our Gilded Age, back in 2012. He wanted to check in and see if I was interested in reviewing their new EP, and of course I said yes. I really enjoyed Monument, going as far as saying: "The way the Illness can root around every metal cliche that's ever been passed out and whip up something novel and interesting with the resulting pile--well, that's just not that easy to do these days."

So it's sad to see this SF prog metal band call it quits, even if it winds up being temporary--these five new songs are more focused, more consistent and more confident than anything they've done before. Perhaps it's because this is a smaller chunk of music, and it's easier to wrap it up in a big bow, but Mirage sounds as if the band, after being together for six years, finally hunkered down and agreed that "we're gonna start doing it like this now." Since my only minor quibble with Monument was its enormously ambitious sound, you may see what I mean about Mirage being a big step in the right direction when it comes to making all the pieces fit together.

I feel bad for putting it like that, as if The Illness made some terrible mistake by quitting now, just when things were going to break for them. It's just that each of these five songs are so strong. "Lion's Share," the opener, starts off with a '70s horror metal groove that pays tribute to Alice Cooper before succumbing to a fretboard-fest that may or may not remind you of a little old-school Van Halen. "Winter" reminds me a little of Alice in Chains covering Tool, with its despairing harmonies mated with precise, fearsome musicianship. I like the way these five guys can step back and let the music breathe in the softer passages in "Violence" and "Cut This Rope." (This is where the band's subtle jazz influences come to the forefront.) The exuberant finale, "Vitriol," even throws in huge dripping sections of authentic hardcore '80s punk.

It's almost as if the band is answering all those horrific interview questions about their musical influences by putting it all out there as a final statement. This is who we are, basically. Listen to these five songs and you might get a decent idea of what we wanted to do. The only thing missing is a few more songs, guys.