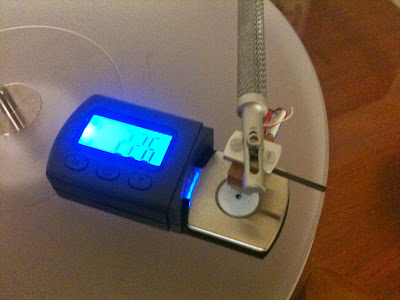 It's been hard keeping up with this blog for the last few weeks. I've just been busy with a couple of big writing projects and haven't had time to write for fun. I even wrote a blog post a few days ago where I talked about taking a possible hiatus from this blog because I truly hated seeing it languish and the Google stats dwindling to pre-2011 levels. I've known this for quite a while, that my daily unique hits are directly proportional to the amount I write. It ain't rocket science.

So I wrote that blog entry, posted it for a few minutes and then changed my mind and deleted it. In the few minutes that it was up, two people read it. So to those two people...never mind.

Tonight I'm just checking in. I recently bought a couple of analog accessories that I've needed for quite a while. The first accessory, as you can see above, is a digital stylus tracking force gauge. For years I've been using one of those old manual see-saw thingies, and borrowing a digital one periodically to check my accuracy. (The latter situation usually occurs during trade shows, when I really have to have everything dialed in perfectly.) For years I've put off buying a digital tracking force gauge because they were originally quite expensive--the first one I saw was $300--but now they've gotten quite cheap. 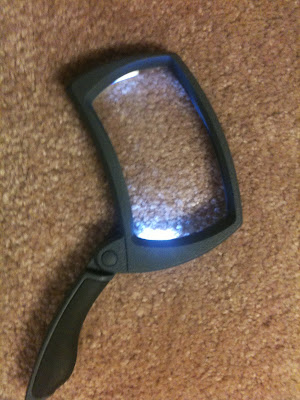 This one cost me less than $20 and the instructions were in Chinese, so I wasn't sure if it was going to work for me on a professional level. One concern that I had--something two or three people warned me about--is that some of these cheap gauges are actually re-badged and re-purposed from other types of mini-scales. One problem with that is these gauges may have scales that are made from magnetic materials--which of course is totally unsuitable around the magnets inside of phono cartridges. It would take a millisecond to complete destroy the cantilever.

I was advised to buy a cheap gauge only if it was clearly designed for phono cartridges. So I did, and it wasn't...magnetic, that is.

Anyways, here's the reason I needed one. I used the old seesaw to set the tracking force of my Unison Research UN1 cartridge. It's got a lot of hours on the stylus, so it wouldn't have been a total disaster if the scale was magnetic. I originally set the tracking force at 2 grams (the Clearaudio Virtuoso on which this cartridge is based has a recommended range of 2g to 2.5g, and the Unison Research specs are 2.2g). When I re-checked it on the digital gauge, the LED display read 1.87g. Way too light. I wound up moving the tracking force up to 2.2, and when I listened I heard a huge difference in clarity and focus. So far I'm happy. 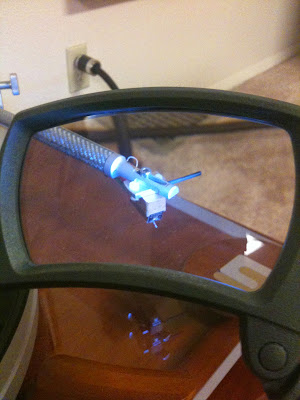 The other accessory is a bit more simple--it's just a lighted magnifying glass. Lately I've been noticing that these 51-year-old eyes of mine are no longer able to see the point where the tip of the stylus lands on the alignment protractor. This accessory--again, way less than a sawbuck--makes all the difference in the world when it comes to aligning cartridges, setting azimuth, setting VTA and checking the stylus for wear.

I've had a lot of audiophiles my age tell me that they can't/won't learn to align a cartridge because their eyesight is too bad or their hands are too shaky. Buy these two accessories, along with a bottle of Lagavulin, and you'll see how easy it can be.
Posted by . at 10:03 PM