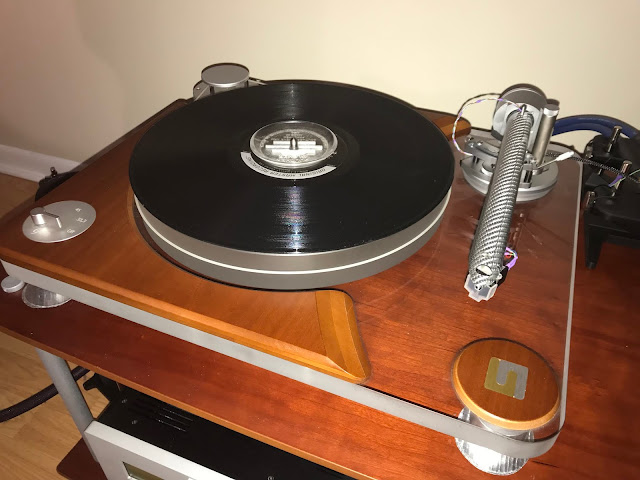 I've just made another change to my review system--I've installed The Wand tonearm from New Zealand on my trusty Unison Research Giro turntable. As the US distributor I've installed a couple of these tonearms in the past, but this is the first arm from the new Master Series and we bought one so I could both familiarize with the installation and, well, up the ante when it came to my analog rig. (The stock tonearm on the Giro is a modded version of the Clearaudio Satisfy tonearm, which is a fine tonearm and has been a steady team player over the last few years.) The current MSRP of the 9.5" Master Series tonearm is $2250...there are also 10.3" and 12" versions available.

The Wand Master Series has the following improvements over the Classic and Plus Series tonearms: easily adjustable-on-the-fly VTA, a vibration shunt/damper (which comes in the form of an oil-filled trough), silver-coated copper wiring and a silver carbon fiber arm tube. You can easily tell the difference between the Master and the others in the line--the Master has a silver arm tube while the Plus and the Classic have black arm tubes. The armrest assembly on the Master is also much more complex. 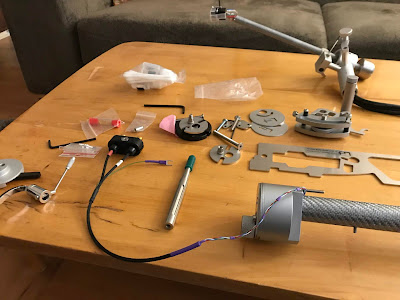 When I first unpacked the Master from its compact wooden box I was surprised by all the pieces, especially compared to the Plus arms I've installed. My first impression was how daunting it all looked, but once I sorted everything I out I realized that there were several versions of many parts so that the Master could be installed on a wide range of turntables. This is a feature for many premium tonearms--I remember my SME V tonearm and how many extra parts and hardware remained in the box after I was done. Most of these extra parts revolved around the two-piece mounting plates for the arm--different plates work on different turntable plinths, with different screws for different plinth thicknesses. 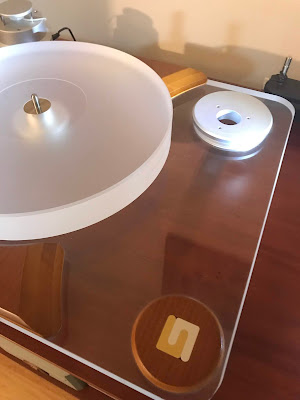 Finding the right mounting plate for the Giro was the reason why I had to install and uninstall the Master three times. The mounting plate for the Satisfy arm actually has more than one piece, and I had to remove more than I anticipated to set the height of the arm so it would line up with the platter. This is the Giro sans arm, as clean and disassembled as I've seen it. The Wand tonearm can be mounted with any turntable with the right size arm hole in the plinth--23mm to 25mm are ideal, but the mounting plates will work with holes up to 28mm in diameter. If the hole in your turntable is bigger--up to 48mm--Simon Brown, the designer, will send you a fitting. Simon offers a wide range of additional accessories that will help you install this tonearm on a wide range of turntables. 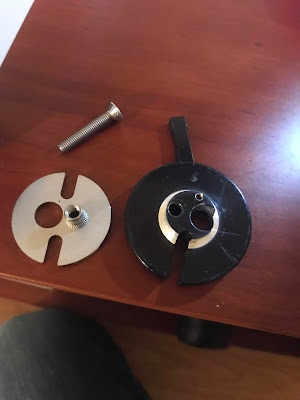 This was the mounting assembly I wound up using. I had tried a couple of the others, but they didn't quite fit. Then I noticed this plate, which had a tiny purple post-it note stuck to it. The note was from Simon, who told me that he designed this particular plate for the Giro. D'oh. (Simon is a stickler for reading instruction manuals FIRST.) 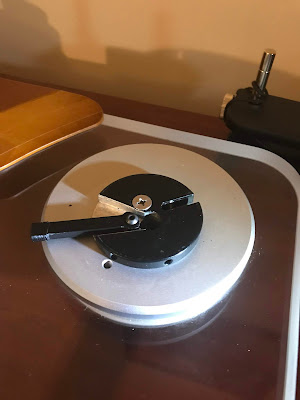 This is what the mounting plate looks like after it has been installed. Notice that Phillips-head screw that keeps the two plates together? Turns out it's very important later. I'm jumping ahead, but when you loosen that screw, it allows the plate to move around in the hole. That's how you set overhang on the cartridge! I like this much more than constantly fiddling with the tiny mounting screws on the cartridge, and those tiny bolts that like to fall into the carpet, never to be seen again. 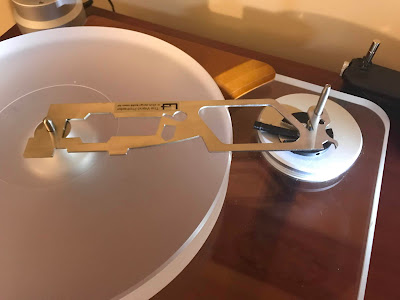 This is how you position the arm assembly so that the effective length of the arm is correct. You install the spindle (The Wand is a unipivot, which means the arm tube rests on a single point), set the correct height using a notch on the side of the supplied jig (that funky-looking metal thing), and then you place the jig between both spindles to get the distance correct. This jig was so accurate that when it came time to adjust the overhang on the cartridge, it was already close to correct. The jig itself is fantastic--you can set everything but tracking force with it (which is why Simon includes an Ortofon manual stylus force gauge with every arm he sells). You can set overhang and azimuth with it as well. 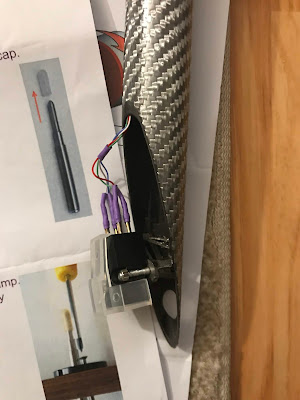 Whoops, I forget something. The first step in Simon's manual is mounting the cartridge on the arm before it is installed on the turntable. I'm not going to on and on about this, other than it's very easy to do with The Wand--my main problem, as usual, is with the antique mounting hardware required by the Denon DL-103. (My Transfiguration Axia will be mounted after it gets a re-tip, and it will be much easier to mount.) Notice that the holes for the mounting screws are fixed--overhang is set at the mounting plate, which is unique in my experience. Also, Simon includes a couple of small plates that can be installed between the cartridge and the headshell to add weight--a feature needed for lightweight cartridges. 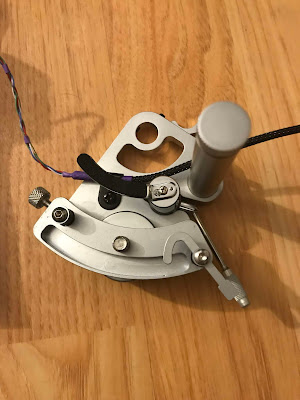 Next, it's time for the armrest assembly, which comes almost completely assembled. You just have to install the cuing level (easy), hook up the anti-skate (the traditional tiny weight/monofilament style) and set the right height of the armrest on the spindle. There's a trick to the angle of the armrest so that it doesn't collide with the arm as it tracks across the record, so that the vibration shunt is aligned, and so the anti-tracking weight hangs loose. Then you route the tonearm cabling through the clip so that the wire makes a nice arc that doesn't touch anything on the arm. 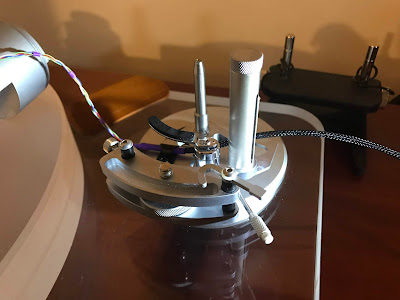 This is what everything looks like after the armrest is in place. That tall tower is the VTA setting, which can be adjusted on the fly. You can also see the vibration damper and its trough, which is filled with oil. Simon gives you three different bottles of oil with different viscosity so you can experiment with the results--or you can choose not to use the oil at all. You can also see the armlock, which hooks onto the same post on the bottom of the arm tube that drags through the oil in the trough. 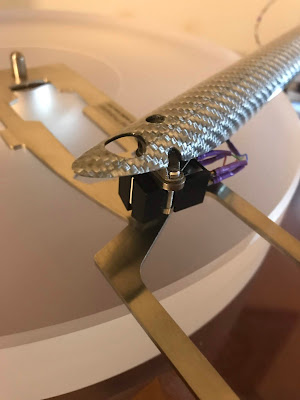 Here's one more photo of the alignment jig, and how easy it is to set overhang. For me, that's one of the most time-consuming parts of mounting a cartridge--fiddling with the tiny screws, checking the tip of the stylus with a protractor and a lighted magnifying glass, going back and forth until you get it right. Getting the overhang right took much less time than usual. From there it was just a matter of getting the tracking force right (Simon includes a number of plates that can be added to the back of the counterweight, with fine adjustments done with a large, knurled bolt--again, simple.) Azimuth is also adjusted by adjusting the counterweight--a notch on the jig helps with that as well. 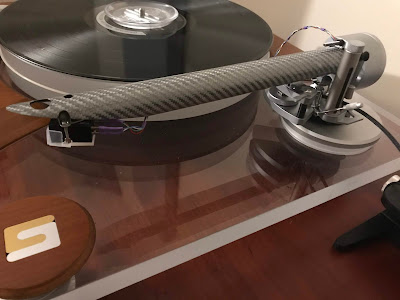 Next thing you know, I was finished. It took several attempts because, as I explained, I wanted to try all of the parts to find the right combination to match with this particular turntable. But once I dialed it in, I could probably take this arm apart and put it back together in a relatively short amount of time.

And the sound? Yes, I noticed an immediate improvement in the overall sound of the system--everything sounded more full, with better bass control. I do have experience with this arm and my Transfiguration Axia--that's the combo we used at AXPONA a couple of years ago--so I know I will hear incredible gains in detail once that's back in the system. But for now, I'm content to know I tackled this super-arm, and this will make my music reviews ever more fun than before!