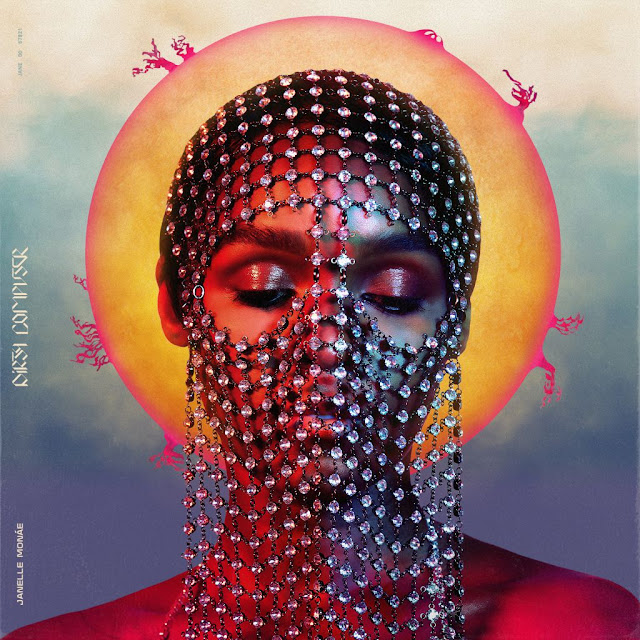 Here's a little synchronicity for you. The other night I was driving down the New York Thruway and was listening to an NPR interview where the guest was a British author who had a new book out on precision engineering and its effect on modern society. One of his central ideas focused on our need for ultra-precise designs--his example involved the tiny transistors inside our cell phones--and how we are more susceptible to catastrophic failures in designs because the tolerances in manufacturing have become so small. He stressed the continuing need for craftsmanship and how the human element is often required to make precision designs work flawlessly.

After the interview was over, I switched to my car CD player and was instantly treated to "Crazy, Classic, Life" from Janelle Monae's new album Dirty Computer. Janelle was singing about the simple joys of life and how we have shied away from them in our quest for a perfect tech-based society--running around naked at luaus, loving the smell of trees as you drive down the road, basically being accepted for being an imperfect yet fun-loving person. Then I realized this entire album has the same theme, that we should stop stressing out about meaningless things. We should enjoy ourselves more. Sounds like a party album, right?

By now it should be obvious that I'm a huge fan of Ms. Robinson. She spent the first decade of her amazing career following the adventures of Cindy Mayweather, a time-traveling android from the future who falls in love and winds up sparking a revolution. From the 2007 EP Metropolis (Suite I) to the ground-breaking masterpiece that is 2010's The ArchAndroid (Suites II and III) to 2013's The Electric Lady (Suites IV and V), Monae has shown the world that she has imagination and talent that stands out from the rest of pop music. Her complex themes about coming to terms with the onset of powerful human emotions is an inspiring and breathtaking blast of Afrofuturism, science fiction and an easy mastering of multiple musical genres. Plus, her singing voice is powerful and limitless and as perfect as I can imagine. You have your favorites, and I have mine. 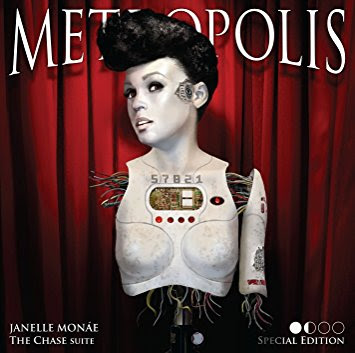 Dirty Computer sounds like the title of Suites VI and VII, but it's not. Janelle Monae is no longer speaking through Cindy Mayweather. She's speaking for Janelle Monae, the now 32-year-old who's been the face for Cover Girl for some time now, and the same woman whose first two movies (Moonlight and Hidden Figures) were nominated for an Oscar for Best Picture (one of them, obviously, took that award). She's obviously been through a lot of the things we've all been through over the last decade, and she has something to say about that--as Janelle Monae.

As you might imagine, Dirty Computer has a very different feel than the other albums. On its surface, it seems like a fun pop record, one that has a clear '80s R&B feel that jumps back and forth between Madonna and Prince and maybe even Whitney Houston and Janet Jackson. If that doesn't sound like your thing, just hold on. The deeper you dig into this album, the more you'll realize that Monae's views of the world aren't seen through rose-colored glasses. She's angry, first of all, so angry that there's one of those parental warning stickers on the cover. Cindy Mayweather's adventures were mostly suitable for general audiences, but Dirty Computer definitely earns an R-rating for its numerous f-bombs, not to mention its sexual frankness. That, of course, is not a bad thing by any stretch of the imagination. It means that Janelle Monae is speaking from the heart, and that heart is heavy and open and passionate. Stand back and let her speak. 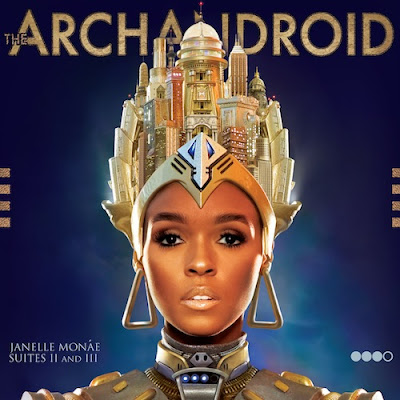 "If you want to grab my pussy, this pussy'll grab you back" in "I Got the Juice" is a warning, not a come-on. It's clear that Monae is not fine with the current leadership of our country, but she's also not fine with the need to fight for basic human rights. Her songs are rich with references to #MeToo, same-sex marriage and the Black Lives Matter movement. Going back to my first point--stressing out about meaningless things and enjoying life--having these concerns does not take away from these goals. She seems to be saying "Let's get all this stupid fear-based BS behind us, and we'll all be much happier." No song better summarizes this idea than "Screwed," which is delightful since it's the catchiest tune, ripe for airplay--except for the unfettered parade of profanity, joyously realized. (Then again, CeeLo Green managed to have a hit with "Forget You!") But her ultimate idea is this:

Now set this all to a bouncy Madonna groove straight out of 1985, finish up with a truthful, somber rap from Zoe Kravitz and you'll have an idea of just how deep Monae intends to go beyond those slick, danceable beats. If you think anger and pessimism are Monae's only offerings this time around, however, just hold on again. She's always been gifted when it comes to pure love songs, the ones that are honest and realistic and yet delivered with a heart-melting ease. "Don't Judge Me" is the greatest example of this here--Monae tells her lover that she can be a little weird, a little crazy, but none of that matters when it comes to loving someone for who they are. It's one of her most gorgeous and sexy songs, all wrapped up in velvet. 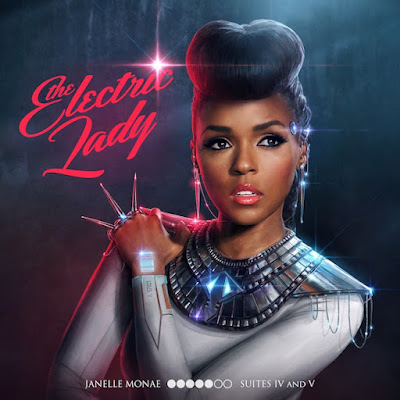 As usual, Monae collaborates with the best. In addition to Kravitz, she also works with Brian Wilson on the title track and Pharrell Williams on "I Got the Juice." She also enlists the help of Jon Brion, Nate "Rocket" Wonder, Matt Jardine and Chuck Lightning. Monae also lists her inspirations for each track: Wakanda, Gloria Steinem, Paul Simonon and Barack Obama. Perhaps the most important influence is Prince--he worked on The Electric Lady and was helping Monae with this album when he passed away. There are times when you can easily imagine Prince singing these songs after swapping the gender in the lyrics. Prince and Monae have a lot in common--both of them are comfortable with rock, pop, funk, R&B and whatever else you got, and they can also blend them all together and make it sound like no one else. The spirit of Prince is everywhere.

If I had a single criticism of Dirty Computer, it's that it doesn't have the overwhelming impact of The ArchAndroid--but perhaps that bolt of lightning will never be repeated. (Just a few weeks ago I treated someone to her first listen of that album--after the first couple of songs she complained about my musical choice because she was too rock and roll, but by the end of it she couldn't stop talking about its greatness.) The new album is closer to The Electric Lady, where repeated listens show off all the hidden treasures. If you know nothing about Janelle Monae and you listen to this album first, you might not see what the fuss is about. But I love her because she's wildly talented, almost unfairly so. She is a force of nature.
Posted by . at 12:19 PM