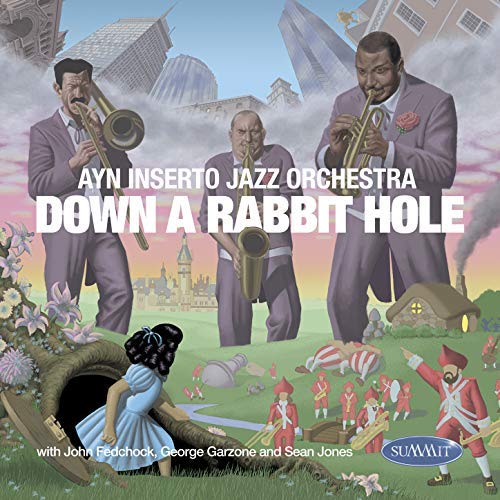 Of all the big band jazz recordings I've reviewed over the last year, this might be the first orchestra led by a woman. I'm presenting this as objectively as possible, but shouldn't women bandleaders be more of a thing? There are plenty of female jazz musicians and certainly singers, not to mention composers. I'm a bit surprised by this. Other than Carla Bley and Maria Schneider, I can't think of another.

With Down a Rabbit Hole, we have a leader in Ayn Inserto, a composer, arranger and educator who was born in Singapore but was raised in Bay Area and now is a fundamental part of the Boston jazz scene. As her biography reveals, she started taking piano lessons as a child and "learned to read chords from a book of Disney tunes and soon started substituting her own chord choices to make the songs sound more interesting." That certain sounds like the birth of an exciting new talent, and soon she was studying jazz piano while playing the organ for her church choir, a venue where she was able to learn how to improvise, strangely enough. Her history sounds like a primer for independent musical thinking, and that shows up in her arrangements. She has a distinctly melodic approach to big band jazz, and her signature is bright and colorful. 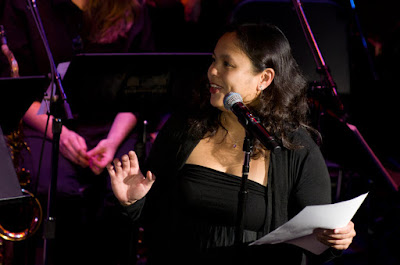 "The trick about falling down rabbit holes is knowing how to get back out," the liner notes explain, and Inserto's gift is cleverness--especially the way her compositions constantly shift in unexpected ways. With the help of gifted soloists Sean Jones (trumpet), John Fedchock (trombone) and George Garzone (tenor sax), her music is always playful and positive without pandering to the audience or depriving the content of emotional depth. There is a happiness throughout these seven songs--mostly originals except for a stunningly original take on Berry Gordy's "I'll Be There"--and Inserto's approach is always one of enthusiasm and gusto. As I've said before, big band jazz is supposed to be somewhat flashy and dynamic with only occasional sojourns into ballads and sad songs, but her orchestra is downright vivacious.

I'm also impressed with the sound quality on this recording, which was captured on the Shames Family Scoring Stage at Berklee in Boston. Take the opening moments of the first track, "Three and Me," and the way drummer Austim McMahon's ride cymbal sounds so intimate and pure--as in a trio recording. There's a sensitivity to scale here, which goes hand in hand with Inserto's keen sense of dynamic control, and that helps to spread out that big band sound so the individual components aren't buried in a wall of sound. While much of this is in the realm of recording engineer and mixer Mark Wessel and mastering engineer Rich Breen, it's Inserto herself who has produced this album as well, along with co-producers Fedchock and Jeff Claassen. This places Inserto in the "force of nature" category, where she has mastered a vision of big band jazz that is exciting and original and worth seeking out.
Posted by . at 11:12 AM