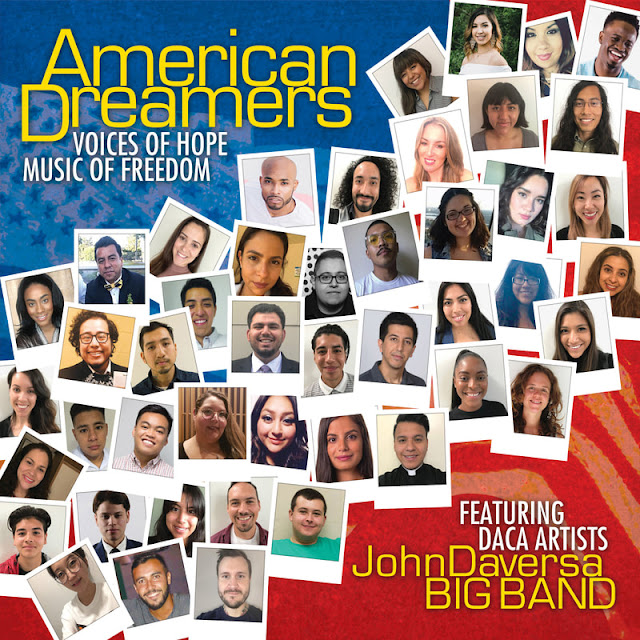 It's not often that you can call a big band jazz recording timely or topical, but here we are with American Dreamers, a project from John Daversa's Big Band that brings together DACA artists who can also play musical instruments and otherwise perform within a big band setting. Daversa worked with several non-profit immigrant organizations and was able to locate 53 Dreamers in 17 states, children of immigrants from such countries as Belize, Bolivia, Brazil, Mexico, the Philippines, Singapore, South Korea, Nigeria, Pakistan and even Canada. American Dreamers, in its final form, is a busy, ambitious mixture of songs chosen by the Dreamers, songs such as "Living In America," "Immigrant Song," "Stars and Stripes Forever" and "America" from West Side Story, all interspersed with stories of growing up in America from the Dreamers themselves.

As you can guess, this is a very unique big band recording, and not just because of the themes. Musically, Daversa's band is willing to take all kinds of crazy risks. You probably noticed that I mentioned "Immigrant Song"--yes, we're talking about the Led Zeppelin song, and it blends the big band sound with lots of churning, electric guitars and--wait for it--sections of pure hip-hop. It's wonderful and exciting and like nothing you've heard. In other tracks these dreamers perform musical and vocal solos, complex percussion grooves, spoken word poetry and more rapping. Did I say this project was ambitious? 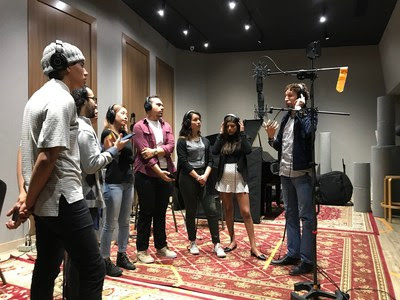 The beating heart of this album, however, is the stories. One Dreamer talks of earning a university scholarship and being unable to take advantage of it because of his immigration status. Another explains that she became a drummer and percussionist because it helped to alleviate her stress about her immigration status. Another describes how her family came to America to get medical help for her sister. These stories are not casually told, but conveyed with heart and emotion.

"Music has always been tied to the fight for justice." This quote from U.S. Senator Kamala Harris, along with another from Senator Lindsey Graham, are featured prominently on the back cover of American Dreamers, and that provides the momentum for the album, the call to action. To appropriate an old musical cliche, Daversa's big band plays with feeling, but it's more real and sincere than usual. This album could have been shrouded in earnestness, but the skill and cohesiveness of these arrangements brings the cause to another level, one that should garner significant attention once the word gets out. Listening to American Dreamers also begs the question: why don't they take this on the road? Put it on Broadway! Keep fighting the fight.
Posted by . at 10:03 AM