Julie London is the woman!

That doesn't quite sound right--it's not the same thing as saying that some guy you know is the MAN! I'm just trying to express my pleasure that Julie London, one of my very favorite female jazz singers, has become sort of a model for other contemporary singers over the last couple of years. When you dig into Julie's wonderful (and wonderfully well-recorded) catalog, you'll slowly remove the layers of the proverbial onion and realize there's so much to discover in a style that, for the most part, seems simple and straightforward. Sure, she was sultry and sexy and evocative, but she also had a sort of innocence about her that isn't discussed that much. When I listen to today's jazz singers try to channel her spirit, they often miss that subtle paradox.

Once again I've noticed that my review pile is full of recordings of female jazz singers. There was a time not so long ago when I'd be complaining about that, but this year's crop of "female vocals for audiophiles" is ripening into quite a stellar harvest. Kate Reid, who hails from the Great Lakes region, stands out from this current crowd because she's adopting London's minimalist presentation, one that keeps everything quiet and direct. That's smart, because Reid's alluring alto has plenty of nuances that shouldn't be hidden by an over-produced release. Her style is close enough to London's that you'll admire her taste in music--her new album, The Heart Already Knows, is a mix of standards and pop tunes--but she's doing so much more than paying homage to a legend. (This isn't even a tribute since these songs are not known as London songs, but there are many similarities in the approach.) 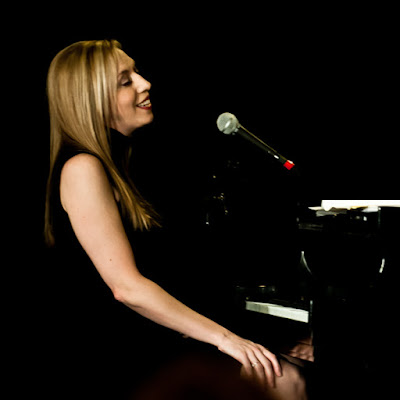 I should stop with the endless comparisons, since that isn't quite fair to the very talented Reid. It is fair to say that she affects me in the same way as London, which is basically wow, I love listening to this person sing these words in such an interesting and heartfelt manner. Reid's complex set of vocal inflections are the mark of someone who knows a classically-trained voice can't always convey a wealth of life experiences--either good or bad. That's why the skilled musicians who share the stage with Reid are so reticent. They're standing out of the way, letting you soak up that big, warm voice. In most cases she's accompanied by little more than a piano or a guitar, albeit from all-stars such as Paul Meyers, Larry Koonse and yes, the great Fred Hersch. It's interesting that Reid is also known as a talented pianist, but she chooses focus everything on her splendid vocal interpretations.

The Heart Already Knows, if you haven't figured it out yet, is a singer's album, one where most of your attention is continually drawn toward the woman in the black dress at the front of the stage. I suspect that accounted for so much of Julie London's charm, that she mastered the art of commanding attention from the audience. Inside that charm is that innocence I mentioned, and that makes this singer even more intriguing. Listening to Kate Reid gives me the identical impression of a singular spotlight, one that captures the essence in each syllable. Highly recommended.
Posted by . at 2:21 PM