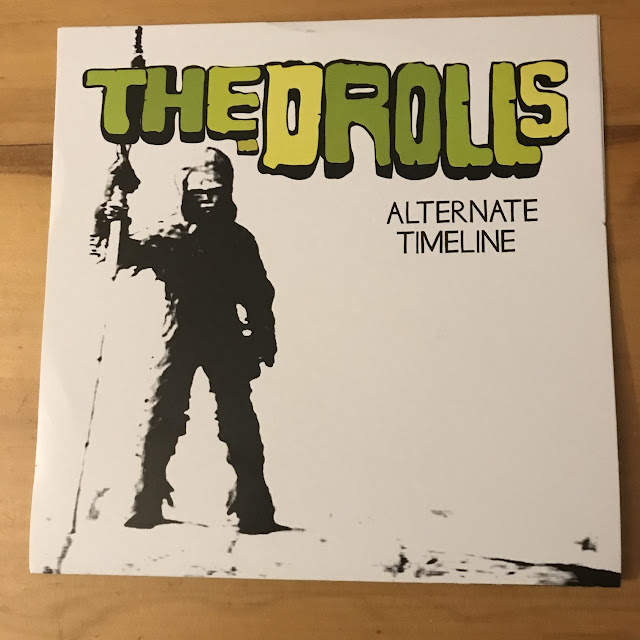 Is anyone out there getting their vinyl fixes off 7" 45RPM singles? I'm sure the answer to that question is dependent upon how old you are. I suspect plenty of young people, not to mention people of all ages who still love indie rock from small indie labels, still grab the little 45s whenever they can. They're fun, they're relatively cheap and it's a great way to get a new band's music out there to the fans in a very specialized way--one that can't be replicated by digital streaming. I also believe there are plenty of people my age and older who started off their love for music with a stack of 45s and a little record player. This group may still be attracted to the novelty of the 7" single for purely nostalgic reasons. 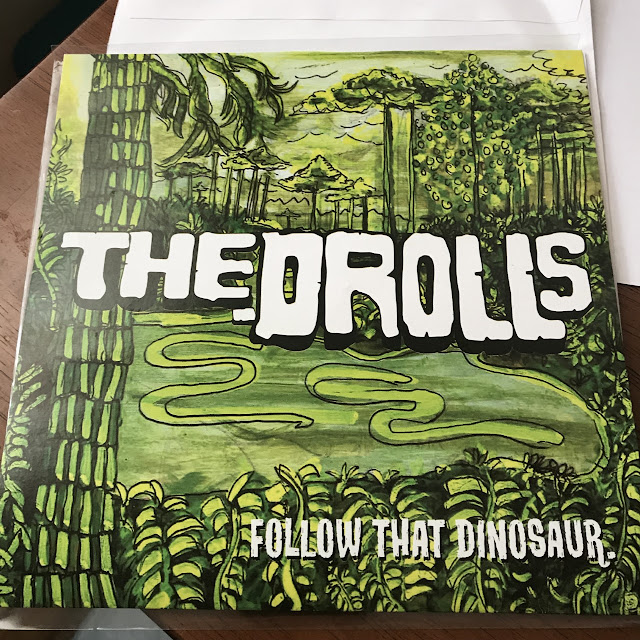 I've noticed that my own collection of 45s is growing quicker now, in 2018, than during any other time in my life. I lot of this has to do with the connections I've made with the indie rock world over the last decade or so, going back to my days in Portland and up to and including the local Syracuse record labels such L.R.S. I've mentioned Ean Hernandez of Top Drawer Records before--he was my source for Date Night with Brian and the recent 14 Soda Punx LP. He sent me an email a few weeks ago about "a new 7" that I'm putting out for my old bandmates: Denny and Josh from Sicko." The new band is named The Drolls, and they actually provided one of the tracks on the Soda Punks album. They're joined with Julie from Guest Directors to form a true power pop trio. 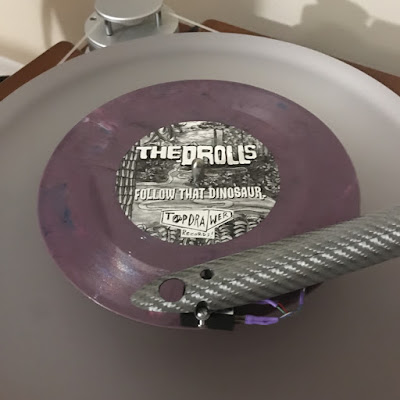 In the past I've reviewed singles, and in recent years it seems as if the goal is to cram as much music as possible onto this little discs--at least two songs per side, accompanied by a nice dollop of inner-groove distortion by the time you get to the dead wax (which is minimal at this point). Ean keeps it old-fashioned and clean, however--just two brief songs, "Follow That Dinosaur" and "Alternate Timeline," one on each side. This single has the same minimalist indie production values as Soda Punx, but as I mentioned in that review it's sort of desirable for the punk and post-punk ethos. So you're not getting brilliant sound quality, but you are getting a purist approach to this kind of music which is essential to its enjoyment.

That said, if you loved Soda Punx, you'll love this. Ean and his friends at Top Drawer straddle that bridge between old-fashioned punk and power-pop from the '80s and '90s. (Ean officially calls it "pure power pop punk rock.") There's that same quickness, same grittiness (especially in the vocals and the Nirvana-esque chord progressions). There's also a distinctly happy feel to these two songs--Top Drawer isn't about gloom and doom and terror and sheer unbridled anger, but energy that invigorates. I don't know if I can dig that deeply into a two-song single, but I can tell you that you can check it out yourself without making a major investment, and maybe you'll browse through the Top Drawer catalog and re-discover how much fun this music truly is...especially on 45 singles!