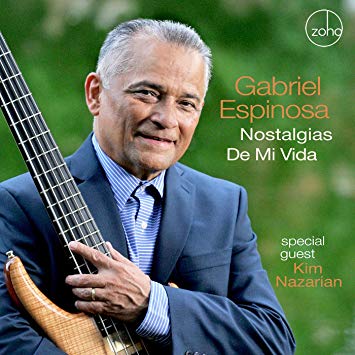 "I chose the title Nostalgias De Mi Vida in honor of my life in music."

I'm just going to assume that I don't have to translate the title to you. I don't even need to discuss the themes behind Gabriel Espinosa's new album on Zoho Records, since the beauty is in its simplicity. I do want to go off on a tangent here, because it might be a key to opening this music up. Many electric bass guitarists usually try to insert a modicum of funk whenever they are part of a jazz ensemble--that sounds like a dumb generalization, but I just don't hear a lot of plug-in bassists try to preserve the unique physical presence of a big double bass through any particular style. Does that make sense? It does, just a little, in the world of Latin jazz.

What I'm saying about Gabriel Espinosa is that he plays an electric bass, for the most part, like it's a stand-up bass. I'm not sure if that's important on any level, but I notice it a lot here. From a distance, or in the car, you might miss this detail. It's also tough to concentrate on Espinosa's beautifully regulated tones when singer Kim Nazarian is out front on about half the songs. Nostalgias De Mi Vida marks a creative partnership with Espinosa and Nazarian--she also composed "Tu Mirada," which floats off toward South America almost instantly. They're an inspired team, with collaborations that are filled with celebration and happy times. 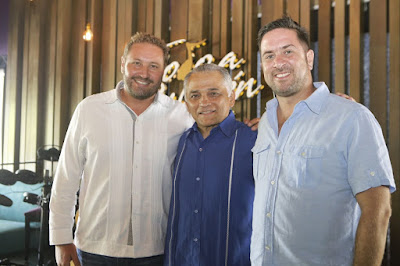 But wait, I was talking about Espinosa's bass. As I said, it's not easy to do that when so much is going on. This album isn't so much an ode to a childhood and the music that evokes those memories. It's a sweeping and fluid series of rhapsodies made of ideas so diverse that it would be unfair to pick it all apart. This is Latin jazz that has been filtered through a lifetime of experiences, and the new stuff tends to glom onto the older stuff and that's why our memories fade. And that is the reason why Espinosa's bass is so central to these arrangements. He's been playing that electric bass forever, and he can make it sound like anything he wants.

The Brazilian influences are not lost in all this--they're up front throughout most of these songs. That means this music isn't so challenging in its ideas that it's willing to sacrifice a gorgeous melody. If you're really into Brazilian jazz right now, and I think a lot of people are starting to rediscover it, you'll really enjoy this music as a sort of slight departure from the norm. But if you're interested, the ideas in Nostalgia De Mi Vida are very layered and complex, and there's another level to explore.