Lisa Marr with The Tranzmitors 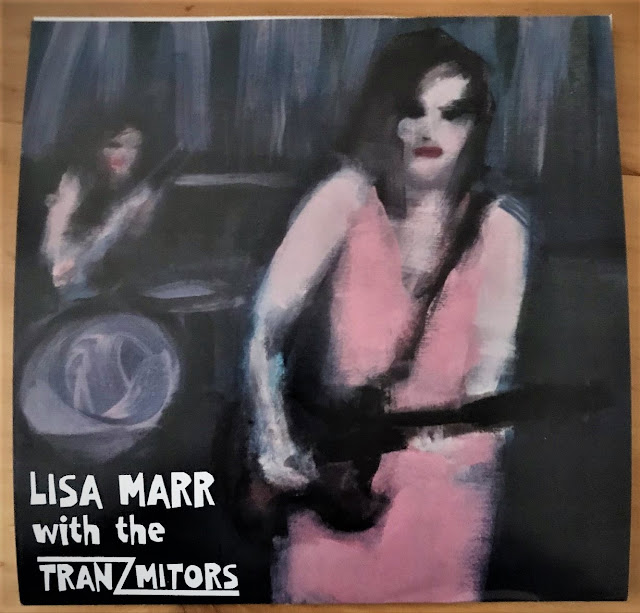 In this miscellaneous vinyl pile I've been attacking over the last couple of days, there are 12" 33rpm LPs, and 12" 33rpm EPs, and 12" 45rpm LPs, and 7" 45rpm singles and 7" 45rpm EPs. Not all of these are clearly marked, so I've been listening to a lot of music at the wrong speeds. Sometimes it's obvious, sometimes it takes a few moments--usually the epiphany occurs when the singer comes to the mic. If you're a vinyl lover, you know what I'm talking about.

This little 7" yellow-orange disc is from my friend Ean Hernandez at Top Drawer Records, and it has the distinction of being the only 7" record I've heard that is recorded at 33 rpm, at least as far as I can recall. Lisa Marr and the Tranzmitors contains a total of four songs, which qualifies as an EP, I guess. These four songs are brief and exuberant post-punk pop songs, however, probably two minutes long for each one, and yet...33 rpm. I'm laboring the point, I know, but I'm thrilled with the variety of vinyl I have in right now. These records are the very definition of variety--all colored brightly in one way or another, recorded at different speeds and formats. The sky's the limit. 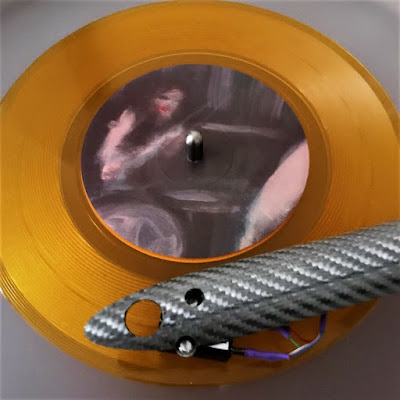 Lisa Marr, formerly from Cub, is a singer/songwriter from the Pacific Northwest. The Tranzmitors are also from the PNW and were formerly known as both the New Town Animals and the Smugglers. The idea of this EP is for these five to cover the songs they sang in their old groups, with a new perspective. (The last song, "Salvation," is an original.) That may sound heady and ambitious, but what you really have here are post-pop, guitar driven songs that use early Bangles and Go-Gos as a leaping-off point for creating a pure, sweet brand of garage rock. Ean calls it cuddle-core.

The sweetness comes from Marr's voice--she's sort of a workingwoman's version of Belinda Carlisle, straightforward and unadorned yet extremely likeable. Her band--Jeff, Nick, Mike and Bryce--play it hard and fast, "as fast as you like it," Ean says on the liner notes. For some reason their energy summoned visions of Road to Ruin-era Ramones, still blistering yet clean. Best of all, the profits from this record will go to the Girls Rock Bandcamp Vancouver, which "builds self-esteem in female youth through music creation and performance."

You can buy this record for just $6 by visiting Lisa Marr's bandcamp page, and you can buy a digital download for the same price.
Posted by . at 12:09 PM