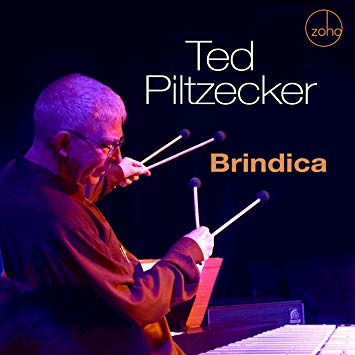 New releases from Zoho Records tend to arrive in clusters, and this has been one of those weeks where I'm staring at a bunch of them--which, of course, is always a good thing. I even snuck one in yesterday, that swirling and exotic Gabriel Espinosa CD, and I didn't perform my usual genuflections about how great this label is in terms of performances and sound quality. It should be a given at this point, unless a bad-sounding one slips by. And that ain't happening today.

Ted Piltzeker's Brindica automatically score points with me because it features a vibraphone player. (Look back at every review I've done a review of a CD with vibes and at some time I probably told you, like now, how much I love the sound. Goes for marimbas, too.) So the math here is getting awesome--a Zoho release that features a struck idiophone? That sounds like I'm setting you up for a disappointment, and oh boy, I'm not. I would have been satisfied with something as simple as that, mostly because the vibraphone is such a primer on the subjects of reverb and decay. Instead, Piltzecker (I have to look very closely at that name at least a couple of times before I actually type it) has such an interesting background, and that adds so much to the performances captured here. 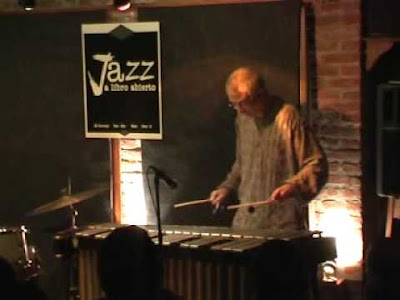 The first interesting factoid about Ted Piltzecker is that he started off playing the trumpet. He's also a superb general percussionist, as you'll hear on this album--he is very skillful with talking drums, marimbas and all sorts of keyboard instruments. And because he's just one guy, he's not playing them all at the same time, which prompted me to say, hey, I haven't heard a vibraphone in a while, Ted, and that's when you stop and listen to his approach on each different instrument. That is the peeling of the onion's first layer, and why Brindica digs a lot deeper than you'll think after just a single listen.

Brindica, by the way, is a portmanteau of "Brazil, India and Africa." Piltzecker and his not-quite big band have a quiet and intimate feel throughout these original compositions, probably because so many percussionists are involved, and they're all not playing at the same time. The ensembles, in other words, change frequently and that allows the songs to bounce between these three countries and their distinct musical cultures with considerable grace. Brazil seems to be the dominate form, but the other two locales are represented more heavily in the percussion and there's another layer gone. It's fun to dig them out, especially when the horn section is at fever pitch.

Like most Zoho releases, there's a lot going on here and repeated listens are mandatory--but extremely enjoyable.
Posted by . at 10:04 AM