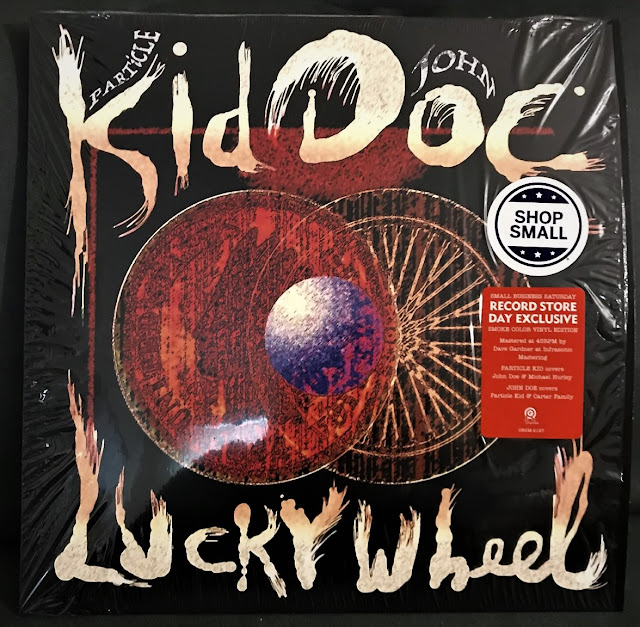 Well, every day is vinyl day, but after completing a couple of major projects and getting the CD pile down to a manageable height, I've discovered that I have quite a few miscellaneous LPs and EPs to review. Most of these came from ORG Music and their pressing plant at the Pallas Group in Germany, and a couple more were actually sent by up and coming bands. Most of the ORG titles were pressed, by the way, for the last Record Store Day--they are now available through the ORG Music site. This first one, Particle Kid and John Doe's Lucky Wheel, turned out to be quite the treasure, one I left sitting at the bottom of the pile, unheard, because I didn't notice what it was at first. From the cover, it looked like somebody named Kid Doc came out with an album named Lucky Wheel. ORG has this officially listed as Kid Doe's Lucky Wheel.

Nope, this is a 45 rpm EP, with Side A featuring Kid Particle covering two songs from John Doe and folk hero Michael Hurley, and Side B featuring John Doe covering songs from Kid Particle and the Carter Family. Despite the beautiful art on the cover and the gorgeous "smoky" color of the vinyl, this 12" EP reminded me of one of those limited run albums put out by a local band in an effort to get exposure, but it's not. First of all, this slab of vinyl was mastered at 45rpm by Dave Gardner at Infrasonic Mastering, so the pressing is clean and the sound quality top-notch. Second of all, I like Particle Kid, but I love John Doe. As a longtime fan of X, a fan who has seen them perform live four different times over the course of 25 years, I feel like John's two songs here are a brief but welcome visit from a very old friend. 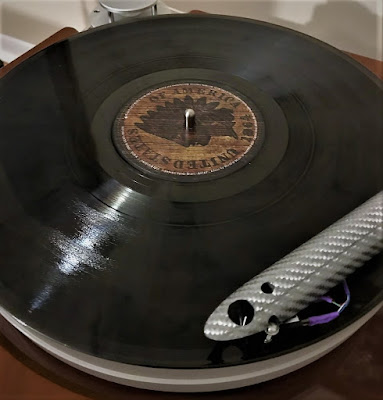 The Particle Kid side is fun--in a dark, dreamy way. "Lucky Penny" is one of those grimy, slightly drugged-out alt-country numbers that I enjoy so well, a throwback to the Velvet Underground as well as No Depression movement. PK, also known in the ordinary world as Micah Nelson, is a young man with an old soul--which is why he's such a perfect match with John Doe, who will turn 66 next month (!). "Captain Kid" reinforces that idea of the distant past with a old-fashioned folk tune from Hurley that is recorded simply, in mono, for maximum effect.

John Doe's turn on the second side makes me feel a little sad inside, and not because it's bad. It sounds great, in fact, and so familiar that I had a lump in my throat the second I heard John's distinctive croon. For a just a few minutes I thought about John, Exene, DJ Bonebrake and Billy Zoom, plus the Knitters, and just how big of a part of my life they've all been. "Wheels" is a very typical John Doe song from his solo career, mostly old-time country with just a shot of that driven-hard-and-put-up-wet momentum from his punk days. "Hello Stranger" is a duet with Amy Nelson, who sounds a lot like Iris DeMent here. Amy is none other than the daughter of Willie Nelson, and she current performs in a ukelele duo with Cathy Guthrie, daughter of Arlo. I like her voice, and I may have to check them out.

Four songs, unfortunately, is not enough from these two. I want to go back and scoop up all the John Doe solo albums I've missed over the years. This is a very special release, one that possesses almost too much emotional resonance for me. Quite honestly I'm surprised how much I was moved by Lucky Wheel.
Posted by . at 10:40 AM