A Technics SL1200 that may actually sound great!

In the interest of fairness, I would like to show you some Technics SL1200 mods that may actually make it sound pretty wonderful. Sound Hi-Fi is a dealer in the UK that offers a variety of mods for the SL1200 that revolve mostly around an external power supply and a precision machine arm board that can accommodate tonarms from the likes of SME, Dynavector, Rega and an affordable line from Jelco.

I haven't heard these myself, but people whose ears I trust say the Sound Hi-fi mods are nothing short of spectacular, and will help skeptics like me appreciate the engineering behind the 1200. Their products include armplates, mats, isolation feet, external power supplies, record weights, strobe disable switches, platters, bearing mods and motor dynamics mods. Sound Hi-Fi also provides a wide selection of arms and cartridges. You can even buy a complete state-of-the-art TT, including a brand new SL-1200, called the Timestep EVO. It costs a somewhat daunting 3695 pounds.

If you order a la carte, the cost isn't quite as shocking. In fact, the guy behind the mods, Dave Cawley, is quite honest and upfront about the Technics; he says that these mods won't make the 1200 the best turntable in the world, but the final product offers a very intriguing choice at every price point. This seems to be echoed in a review Sound Hi-Fi received from TONEAudio, where Jeff Dorgay called his modded SL1200 (which was the one I used for two years) his new reference at the $2000 level. That's fairly surprising, since Jeff was no more in love with the 1200 than I was.

So the Sound Hi-Fi mods seem to be the one 1200 mod that makes sense. I'll reserve my final opinions until I actually hear one. I heard a fully-modded 1200 from KAB USA that tipped the scales at nearly $2000, and I'd still rather own a Rega P3-24. 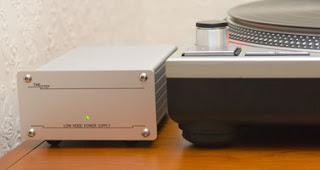 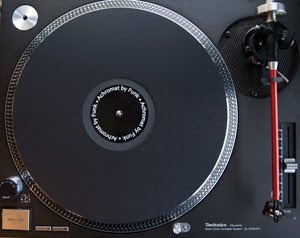 And just to mess with Dan Muzquiz's head, here's an SL1200 with the new Funk Firm FXRII arm! I better he's never seen that before! For more information on the Sound Hi-Fi mods for the Technics SL1200, check out http://www.soundhifi.com/sl1200/index.htm.
Posted by . at 9:40 AM