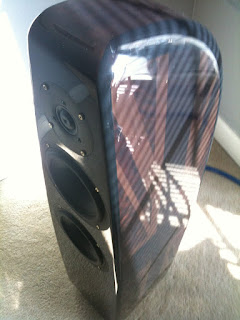 It's been a long time since I've had a pair of $48,000 speakers to play with...okay, I've never had a chance to play with speakers anywhere near this price point. I used a pair of $13,000 Harbeth 40.1s for a few weeks, and that's probably it. No, these are the My Audio Design (MAD) Duke Royal Limited Edition speakers, and I get to break them in for a few days on their way to CES.

I apologize for the troublesome pics--these babies are so glossy and dark that it's hard to capture the absolutely breathtaking finish on them. Turn on the lights and they become virtual mirrors, and I'm pretty much taking a pic of myself standing in awe of the MADs while holding my iPhone. Turn down the lights and they look pure black. But they're not gloss black. This is a very dark-stained wood that appears translucent up close. Yes, that is the Union Jack on the side panels (these are made in the UK), lovingly assembled with different shades of veneer. It takes a month to make these cabinets. I believe it. 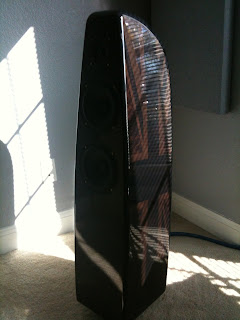 They're also much more compact than they look in the photos. They're only about waist-high, and I can easily pick them up and move them around. Despite their modest dimensions, they produce a GIANT sound with deep, powerful bass that shakes the room. $48K is a lot of money--I could have purchased that BMW 1-series M I really wanted for around the same amount of money--but once you see, feel and hear the Dukes you'll have no doubt that they are serious world-class loudspeakers.

I've listened extensively to a MAD speaker once before--I reviewed the entry-level 1920 a few months ago and found them to be the perfect mini-monitor for those who want a modern, updated and improved version of the classic BBC LS3/5a. I spent a few weeks with them before sending them off to TONEAudio, where they received a very favorable review in Issue #49. 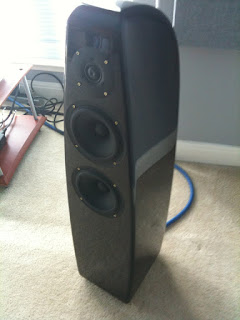 The Royal Dukes share that same sense of refinement, and that same smooooth midrange, but with almost unlimited dynamics. Can it get any better than this? It's possible, since MAD has an addition line called the Royal Salute that has models ranging from $96,000 to $150,000. Colleen and I are helping the designer and founder of MAD, Timothy Jung, get a foothold into the US. MAD is already huge in places like Hong Kong, Singapore and their home base in England, and after my review of the 1920s I received several emails from people who wanted to know where they could hear them in the US. After CES in a couple of weeks, I may have an answer.
Posted by . at 2:56 PM