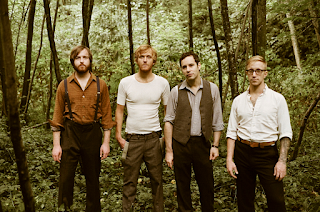 Nearly two years ago I reviewed Campfire OK's Strange Like We Are on CD, and wound up putting it on my 2010 Top Ten list for Perfect Sound Forever. I compared them favorably to another outstanding Seattle band, Fleet Foxes, but I ultimately concluded that "the debut CD from this quartet blazes its own trail and sounds rich, calm and mature in a way that few new bands do."

Just a few days ago I heard from Mychal Goodweather, Campfire OK's frontman, who told me that the band has been releasing new videos on their website at a rate of one per month. (They started in September, so that means you can currently watch three.) You can check it out at http://campfireok.com/. These videos are being culled from Strange Like We Are as well as their sophomore album, When You Have Arrived--which I haven't heard yet.

As much as I liked the debut album, I really should get When You Have Arrived. Until then, we have this videos to enjoy!
Posted by . at 11:38 AM

Email ThisBlogThis!Share to TwitterShare to FacebookShare to Pinterest
Labels: campfire ok strange like we are, campfire ok when you have arrived, the vinyl anachronist