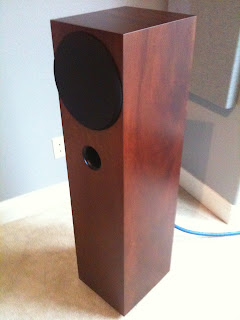 Speakers, speakers, speakers. I have no less than four pairs of speakers that I need to break in before CES next month. Fortunately those $48,000 MAD Duke Royal Limited speakers were just used at a trade show in Hong Kong, so they're pretty much broken in. I spent two days listening to them, loving them, caressing those beautiful cabinets into the wee hours. They do everything you'd expect a speaker at that price point to do--bottomless bass response, crystalline highs, extraordinary midrange. It's almost scary that they do it all while being surprisingly compact and lightweight. Most $50K speakers resemble coffins and weigh hundreds of pounds; I could pick the Dukes up by myself and move them around.

Now I'm playing with a more modest design from MAD--the $11,000 Grand MS Maestro Supreme--and they're larger and heavier than the Dukes. They lack the exquisite cabinetry of their big brothers as you can see, although they are still obviously made with great care and skill. The MS features the proprietary MAD SFC coaxial drivers which are designed to be coherent and offer exceedingly low levels of distortion. The crossovers use pure silver solder, 99.99997% pure copper cabling and "ESA silver diamond" capacitors. 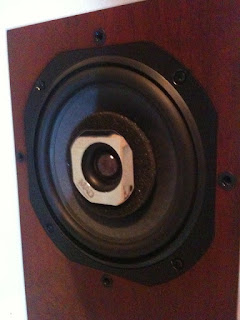 Compared to the Royal Duke, these speakers don't quite plumb the same depths and are slightly less dynamic, but let's face it--the former speaker is quite a tough act to follow (and more than four times the price). Plus, the Supremes still needs some break-in before I can evaluate them fairly. As it stands, they image like crazy and possess a silky, extended treble that's addictive. 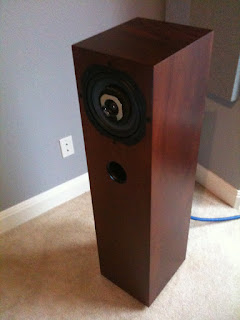 After this, I still have a pair of Opera Mezzas to break-in, as well as another pair of MAD 1920s that I haven't even removed from the box. Plus I have a Unison Research Simply Italy to warm up, and we have yet to receive the Unison Research Unico Upower booster amp from Italy. The Upower quadruples the power of low-powered tube amplifiers up to 100wpc, so the Simply Italy will go from 12wpc to 48wpc. This will be the first Upower in the US, and it's making its debut at CES (in Room 29-117). I'll have more info on the MAD room in a few days. Until then, I'm switching out components and listening to everything from Sam Cooke to Tool in an effort to get this equipment sounding its best.
Posted by . at 3:24 PM